11 Ways to Show Dad You Care

Father’s Day is right around the corner! To help you with your gift search, we’ve curated a list of must-read titles for the bookish dads and fatherly types in your life. We’ve culled the best paperbacks from recent fiction and nonfiction: works of history and current events on topics as varied as the presidency of George W. Bush, the NSA spy scandal, World War I, the epochal summer of 1927, the Revolutionary War, as well as a slew of sumptuous literary and thriller fiction reads. There’s something here for every taste—from the news junky to the thrill seeker—so you can confidently present your father with a thoughtful, personalized gift that he’ll love. 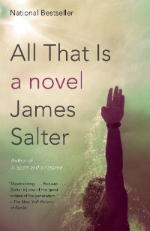 All That Is by James Salter

The eagerly-anticipated novel from PEN/Faulkner winner James Salter, his first in over thirty years, is the perfect gift for the father who loves literary fiction. All That Is explores a life unfolding in a world on the brink of change. Philip Bowman returns to America from the battlefields of Okinawa and finds success in the competetive world of publishing in postwar New York—yet what he most desires, and what eludes him, is love.

This novel is a dazzling, sometimes devastating portrait of love and ambition, a fiercely intimate account of the great shocks and grand pleasures of being alive. 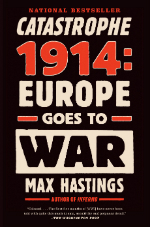 Do you often find your dad glued to the TV, watching the History Channel for hours? In Catastrophe 1914, acclaimed military historian Max Hastings re-creates the dramatic first year of World War I, from the diplomatic crisis to the fighting in Belgium and France on the western front, and Serbia and Galicia to the east, and shows why it was inevitable that this first war among modern industrial nations could not produce a decisive victory. Throughout we encounter high officials and average soldiers, as well as civilians on the home front, giving us a vivid portrait of how a continent became embroiled in a war that would change everything. 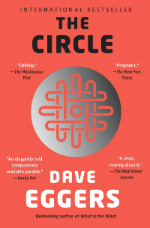 Is 1984 your dad’s favorite book of all time? The Circle, a thriller about the dangers of digital technology, should be his next read. When Mae Holland is hired to work for the Circle, the world’s most powerful internet company, she feels she’s been given the opportunity of a lifetime. The Circle, run out of a sprawling California campus, links users’ personal emails, social media, banking, and purchasing with their universal operating system, resulting in one online identity and a new age of civility and transparency. As Mae tours the open-plan office spaces, the towering glass dining facilities, the cozy dorms for those who spend nights at work, she is thrilled with the company’s modernity and activity. There are parties that last through the night, there are famous musicians playing on the lawn, there are athletic activities and clubs and brunches, and even an aquarium of rare fish retrieved from the Marianas Trench by the CEO. Mae can’t believe her luck, her great fortune to work for the most influential company in the world—even as life beyond the campus grows distant, even as a strange encounter with a colleague leaves her shaken, even as her role at the Circle becomes increasingly public. What begins as the captivating story of one woman’s ambition and idealism soon becomes a heart-racing novel of suspense, raising questions about memory, history, privacy, democracy, and the limits of human knowledge. 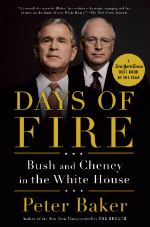 Days of Fire by Peter Baker

Does your father have a passion for politics or biography? Senior White House correspondent for the New York Times Peter Baker has crafted a gripping and intimate narrative that recounts the drama and controversy of the Bush and Cheney administration. Days of Fire focuses on the political partnership between a bold and untested president and his seasoned, relentless vice president. Drawing on hundreds of interviews with key players, and thousands of pages of private notes, memos, and other internal documents, Baker paints a riveting portrait of a partnership that evolved dramatically over time, during an era marked by devastating terror attacks, the Iraq War, Hurricane Katrina, and financial collapse. Peter Baker has produced a monumental and definitive work that ranks with the best of presidential histories. 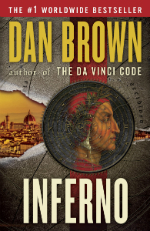 Cinematic, pulse-pounding, and provocative, Dan Brown’s latest #1 worldwide bestseller is a can’t-miss for any thriller fan.

Harvard professor of symbology Robert Langdon awakens in an Italian hospital, disoriented and with no recollection of the past thirty-six hours, including the origin of the macabre object hidden in his belongings. With a relentless female assassin trailing them through Florence, he and his resourceful doctor, Sienna Brooks, are forced to flee. Embarking on a harrowing journey, they must unravel a series of codes, which are the work of a brilliant scientist whose obsession with the end of the world is matched only by his passion for one of the most influential masterpieces ever written, Dante Alighieri’s The Inferno. 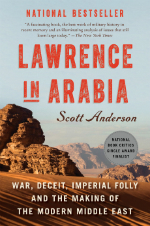 Lawrence in Arabia by Scott Anderson

For the father who enjoys world history and current affairs. Scott Anderson’s highly praised, bestselling, and revelatory narrative covers one of the most epic and consequential periods in twentieth-century history. The Arab Revolt against the Turks in World War I was, in the words of T. E. Lawrence, “a sideshow of a sideshow.” As a result, the conflict was shaped to a remarkable degree by a small handful of adventurers and low-level officers far removed from the corridors of power.

At the center of it all was Lawrence himself. In early 1914 he was an archaeologist excavating ruins in Syria; by 1917 he was riding into legend at the head of an Arab army as he fought a rearguard action against his own government and its imperial ambitions. Based on four years of intensive primary document research, Lawrence in Arabia definitively overturns received wisdom on how the modern Middle East was formed. 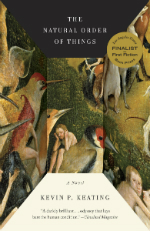 The Natural Order of Things by Kevin P. Keating

From a startling new voice in American fiction comes a dark, powerful novel about a tragic city and its inhabitants over the course of one Halloween weekend. We recommend it to fans of Philipp Meyer, Daniel Woodrell, and Donald Ray Pollock on the lookout for something new.

Set in a decaying Midwestern urban landscape, with its goings-on and entire atmosphere dominated and charged by one Jesuit prep school and its students, parents, faculty, and alumni, The Natural Order of Things is a window into the human condition. From the opening chapter and its story of the doomed quarterback, Frank McSweeney, aka The Minotaur, for whom prayers prove not enough, to the end, wherein the school’s former headmaster is betrayed by his peers in the worst way possible, we see people and their oddness and ambitions laid out bare before us. 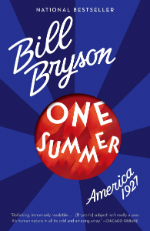 One Summer by Bill Bryson

Bill Bryson’s latest book is narrative nonfiction of the highest caliber sure to delight any dad. The bestselling author of A Walk in the Woods and A Short History of Nearly Everything has produced a riveting new book chronicling one momentous summer in the history of America. It began with Charles Lindbergh crossing the Atlantic. Meanwhile, Babe Ruth was closing in on the home run record. In Newark, New Jersey, Alvin “Shipwreck” Kelly sat atop a flagpole for twelve days, and in Chicago, the gangster Al Capone was tightening his grip on bootlegging. The first true “talking picture,” Al Jolson’s The Jazz Singer, was filmed, forever changing the motion picture industry. All this and much, much more transpired in the year Americans attempted and accomplished outsized things—and when the twentieth century truly became the American century. 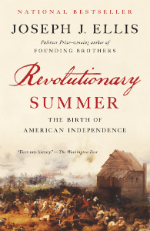 The ultimate present for the American history buff. Revolutionary Summer is a distinctive portrait of the crescendo moment in our national history from the Pulitzer-winning American historian, Joseph Ellis.

The summer months of 1776 witnessed the most consequential events in the story of our country’s founding. While the thirteen colonies came together and agreed to secede from the British Empire, the British were dispatching the largest armada ever to cross the Atlantic to crush the rebellion in the cradle. The Continental Congress and the Continental Army were forced to make decisions on the run, improvising as history congealed around them. In a brilliant and seamless narrative, Ellis meticulously examines the most influential figures in this propitious moment, including George Washington, John Adams, Thomas Jefferson, Benjamin Franklin, and Britain’s Admiral Lord Richard and General William Howe. He weaves together the political and military experiences as two sides of a single story, and shows how events on one front influenced outcomes on the other. 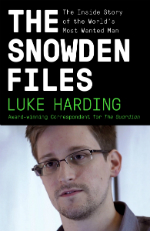 The Snowden Files by Luke Harding

No matter your dad’s thoughts on NSA whistleblower Edward Snowden’s actions, he’ll be fascinated by this inside story of the world’s most wanted man. In a tour de force of investigative journalism that reads like a spy novel, award-winning Guardian reporter Luke Harding profiles a controversial figure in U.S. intelligence—from the day he left his glamorous girlfriend in Honolulu carrying a hard drive full of secrets, to the weeks of his secret-spilling in Hong Kong, to his battle for asylum and his exile in Moscow. For the first time, Harding brings together the many sources and strands of the story—touching on everything from concerns about domestic spying to the complicity of the tech sector—while also placing us in the room with Edward Snowden himself. The result is a gripping insider narrative—and a necessary and timely account of what is at stake for all of us in the new digital age. 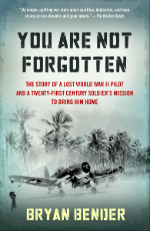 You Are Not Forgotten by Bryan Bender

Bryan Bender’s latest book is not just for military history fans—it is at its core an indelible narrative about the honor and sacrifice of two American servicemen: a Marine Corps pilot who was shot down in WWII and the modern-day soldier determined to bring home his remains six decades later.

In 1944 Major Marion “Ryan” McCown Jr., an earnest young Marine Corps pilot, came under attack by enemy fire and went down with his plane, lost to the dense jungle of Papua New Guinea. Some sixty years later, Major George Eyster V would find himself in the same sweltering and nearly impenetrable rain forest searching for evidence of MIAs. Coming from a long line of military officers dating back to the Revolutionary War, army service was Eyster’s family legacy. After a disillusioning tour of duty in Iraq and almost ending his army career, he accepts a posting to JPAC instead, an elite division whose sole mission is to bring all fallen soldiers home to the country for which they gave their lives. While Eyster’s search for McCown proves difficult, what emerges at the end of the unforgettable mission is an inspiring true tale of loss and redemption.