WHAT: EAST WEST STREET: On the Origins
of “Genocide” and “Crimes Again Humanity”

WHY: “A vastly important book…
An engrossing tale of family secrets and groundbreaking legal precedents.
“In a tense, riveting melding of memoir and history, international human rights lawyer Sands focuses on a subtle, and critical, debate that emerged from the Nuremberg trials: whether the Nazi defendants were guilty of crimes against humanity or of genocide.
“Two Polish-born lawyers, with influence on trial strategy, had strong opposing views. Hersch Lauterpacht, a professor of international law at Cambridge University, maintained that calling Nazi atrocities ‘crimes against humanity’ would lead to protection of individual, fundamental human rights. Rafael Lemkin, who had fled Poland to a position at Duke University Law School, felt, with equal passion, that the murder of whole peoples must be called genocide, a word he coined to describe acts ‘directed against individuals, not in their individual capacity, but as members of national groups.’
“The two men’s positions became pieces of a larger conversation among Soviet, American, French, and British prosecutors, each with his or her own particular stake. The lawyers’ own stakes became intensified when they discovered, during the trial, that many of their family members had been sent to their deaths by Hans Frank, one of the Nuremberg defendants.
“Interweaving the biographies of the scholarly Lauterpacht, tirelessly persistent Lemkin, and arrogant, self-aggrandizing Frank, Sands engages in a search for his own Polish ancestors, especially his grandfather, who was born in the city where Lauterpacht and Lemkin studied law and never spoke of his past.
“From letters, photographs, and deeply revealing interviews, the author portrays Nazi persecutions in shattering detail. He discusses his viewing of family albums with the son of a Nazi officer who could not bear to condemn his father, and he visited an elderly relative whose emotionless affect puzzled him. But she had not forgotten the past; rather, ‘I have chosen not to remember.’ For the future of humanity, forgetting, Sands insists in this vastly important book, is not an option.” –KIRKUS, starred review 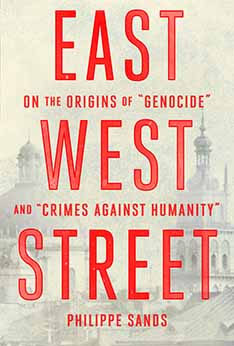