WHERE: The author lives in near Tokyo.

WHY: “Murakami obsessives are in for a treat.
“Given Murakami’s fervent fan base and the enduring strangeness that characterizes his work, it’s not surprising that an aura of mystery surrounds his first two novels: the only previous English translations were published in Japan and they’ve been difficult to find in the West. Now 1979’s Hear the Wind Sing and the following year’s Pinball, 1973, written while the budding author operated a Tokyo jazz club, are finally available in one volume, and Murakami obsessives are in for a treat. All the hallmarks of Murakami are here at their genesis, including his seemingly simple style, which he describes in an indispensable foreword.
“Wind is a touching and almost totally uneventful sketch of a record-collecting regular at J’s Bar, his quiet romance with a nine-fingered woman, and his friendship with the dubious ne’er-do-well called the Rat. Pinball recounts the same narrator’s student days on the eve of the Vietnam War, his encounter with identical twins called 209 and 208, and how he and the Rat become swept up in ‘the occult world of pinball.’
“Both novels, of course, feature digressions on beer, historical oddballs, obscure trivia, and jazz. Elegiac, ambient, and matter-of-fact in their strangeness, these two novels might leave casual readers wondering what all the fuss is about. But for the rest of us, this may be the ultimate bit of Murakami arcana, both elevating his other books and serving as two excellent, though fragile, works in their own right.”
—PUBLISHERS WEEKLY

“Though these stories are more than 40 years old, marking the very beginning of Murakami’s career, they are full of trademark turns…It’s interesting to see hints of the masterly novels to come.” —KIRKUS REVIEWS 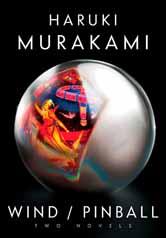 Translated from the Japanese by Ted Goossen.