‘Possessed by Memory’ by Harold Bloom

WHAT: POSSESSED BY MEMORY:
The Inward Light of Criticism

WHERE: The author lives in New Haven, CT.

WHY: “An eloquent and erudite rereading of the author’s beloved works.
“Legendary critic and professor Harold Bloom has created a literary biography from brief essays on the poems, plays, and prose — many committed to memory — that he has reread, with growing insight, throughout his life. He calls this book ‘a reverie’ that meditates on what it means to be possessed by the memory of ‘dead or lost friends and lovers’ and by works of literature. ‘When you have a poem by heart,’ he writes, ‘you possess it more truly and more strangely than you do your own dwelling place, because the poem possesses you.’
“Now 88, Bloom suffers the debilities of aging and, even using a walker, he is constantly afraid of falling. He has been hospitalized several times, and he mourns the deaths of many friends, who include colleagues, fellow critics, and poets whose works he admires. For spiritual sustenance, religion fails him. ‘I am a Jew who evades normative Judaism,’ he writes. ‘My religion is the appreciation of high literature. Shakespeare is the summit.’
“In one of the book’s four sections, Bloom insightfully examines in Shakespearean characters the strange act of ‘self-otherseeing,’ by which he means ‘the double consciousness of seeing our own actions and sufferings as though they belonged to others.’ Other sections focus on biblical verse, American poets, and, in the longest section, elegies. ‘I seem now to be always in the elegy season,’ he writes. Among these poems of praise are lyrics by Blake, Wordsworth, Coleridge, Shelley, Byron, Keats, and Tennyson, whose ‘Morte d’Arthur’ provided comfort to Bloom as he was recovering from two serious operations.
“Literature serves as consolation for an eminent and prolific critic.”
—KIRKUS, a starred review

“Admirers of prolific polymath Harold Bloom will treasure this assemblage…
a rich lifetime of readership and scholarship.”
—PUBLISHERS WEEKLY, a starred review

Many years ago, in Cambridge, England, I attended one meeting of a rather esoteric faculty group that believed you could communicate with the dead. It was a disquieting experience with a gyrating table and spirit voices drifting in. I left, rather abruptly, because I felt out of place. Long before that, my charming mentor George Wilson Knight attempted to persuade me of his conviction that séances were authentic. I recall protesting that this seemed to me an over-literalization of a human yearning. George chuckled and said I was still too young to comprehend a vital truth. 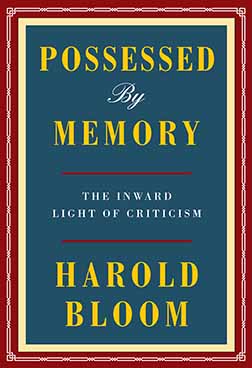