WHERE: The author lived in London, until her death in 2014.

WHY: “Ceremonious, nasty, and
very welcome indeed.
“Half a dozen reprinted stories, originally published between 1973 and 2005, from the late doyenne of the formal English mystery in all its majesty. Fans hungry for scraps from James’ table will revel in the stories.
“Ironically, only ‘The Murder of Santa Claus,’ the longest of them, is a traditional whodunit, using a meticulously evoked country-house setting at Christmas 1939 to bring together an uncomfortable roster of guests and a venerable host who’s first threatened and then killed shortly after he makes the midnight rounds as Father Christmas. The rest of them mostly explore the favorite subject of James’ short fiction: how people no worse than you get or keep the power they crave by conniving in, carrying out, or concealing murders.
“The earliest of them, ‘The Victim,’ is the confession of a timid librarian who killed the man who stole his beautiful wife; it ends with a disquieting twist. ‘A Very Desirable Residence’ matter-of-factly shows the pains a killer will take to secure the eponymous dwelling. ‘Mr. Millcroft’s Birthday,’ first published as ‘The Man Who Was Eighty,’ uses another confession of murder to turn conniving family members against each other in a memorably heartless game of cat and mouse.
“‘The Yo Yo,’ which recalls another Christmas visit cut short by murder, is notable for a telling change it makes from its earlier appearance as ‘Hearing Ghote’: the narrator’s highly questionable actions are no longer inspired by an H.R.F. Keating novel he’s reading but by the more neutral-seeming Treasure Island. Best of all is ‘The Girl Who Loved Graveyards,’ which irradiates the story of an orphaned girl whose memories of her late father and grandmother have fed her unwholesome attachment to cemeteries with a sense of hyperliterate creepiness.” –KIRKUS REVIEWS

“A treat for fans of the late P. D. James…
a collection of six short stories, polished gems that spotlight her skills at plotting, building realistic characters, and conveying the subtlest hints of subtext through dialogue. Every one of these stories is first-rate, and every one of them is vintage James. A must-read for fans of one of the most influential crime-fiction authors of the twentieth century.” –David Pitt, BOOKLIST 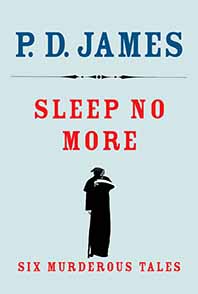