WHAT: RED, WHITE, BLUE, a novel

WHY: “Mesmerizing…deeply affecting…razor sharp.
“Carpenter’s artfully fragmented novel brilliantly uses the conventions of spy fiction to expose the duplicity and betrayals in people’s personal lives. In her chilly, unsparing dissection of the trickle-down effect the muddied morality of bureaucracies has on private lives, she reveals the influence of Joan Didion, queen of alienation.” –KIRKUS, a starred review

“A beautifully written spy novel.
“Successful banker and stockbroker Noel spied for the CIA for 30 years. During this time, his wife, Lulu, abandoned the family, and Noel was left to raise their precocious child, Anna, alone. When Noel dies, Anna tries to piece together her father’s life in the face of accusations that he was really a spy for the Chinese. The nameless CIA agent, who was Noel’s protégé and is now missing, is wanted by the CIA for unofficially exfiltrating a Chinese double agent, who was recruited by Noel.
“Where most thrillers showcase familiar tips on spy craft and weaponry, Carpenter depicts the more esoteric and often byzantine facets of intelligence work. She skips the easy morality of guns, patriotic loyalty, and heroic action to slowly disclose the complexities of the secret world and how it relates to the human heart.
“Readers should not expect to come away satisfied with pat solutions, but rather to be seduced and enthralled with the far more challenging questions that arise and are sometimes, as in life, left unanswered.”
—PUBLISHERS WEEKLY, a boxed and starred review

“A stunner.
“This novel is to literature what pointillism is to art, with dots that combine to make a whole picture, one that merges a moving love story with details of a profession that, by its nature, involves both loyalty and duplicity.”
—Michele Leber, in a starred review for BOOKLIST

“Love, loyalty, lies, betrayal — Lea Carpenter plumbs the depths of all these in this brilliant, very possibly flawless book. I can think of no novel in recent memory that blends the personal and intimate so truly with power and conflict on the grand geopolitical scale. Red, White, Blue is a marvel and a masterpiece.” —Ben Fountain

Espionage is not a math problem. When we met, your father told me about the night you were born, how he spent it in a hospital but not with you and your mother, in a hospital in a city far away from the one where you arrived, on time. He said, with that sly charm, “Though where I was wasn’t quite a hospital, in truth. It isn’t quite a city, either.” He described looking out the window and seeing fires in the streets. He described thinking about your name while watching his friend die, the blood on his hands. His friend, his colleague. 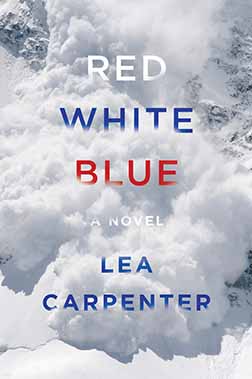