WHAT: RESISTANCE MAN, a novel

WHERE: The novel is set in France in the Dordogne.

WHY: “The passing of an 86-year-old Resistance fighter opens another can of worms (and stocks of truffles and pâté de fois gras) for chief of police Bruno Courrèges.
“Even if he hadn’t been one of St. Denis’ last surviving members of the Resistance, Loïc Murcoing’s death would have disclosed deep roots. In his hand, the dead man grasped a bank note dating from 1940, a note traceable to a real-life 1944 train robbery in Neuvic that netted Resistance forces an amount equivalent to €300 million.
“Two other cases indicate the return of other long-dormant passions. The burglary of retired British civil servant Jack Crimson sets Bruno adrift on deep waters, and the murder of antiques dealer Francis Fullerton, who once served a prison term for receiving stolen goods, carries echoes of gay-bashing thugs’ attack 10 years ago on lycée graduate Edouard Marty, now a professor of interior design, and his ex-lover Paul Murcoing, Loïc’s grandson.
“Bruno, his colleague J-J, and his sometime-lover Isabelle of the Paris Sureté would all love to talk to Paul, but he’s gone AWOL. The mayor of St. Denis is preoccupied by his own sorrows; Bruno’s Scottish girlfriend, Pamela, is riding for an accident; and Bruno’s basset hound, Balzac, is about to be pressed into service in a most unusual capacity.
“Amid all the hustle and bustle, however, there’s still plenty of time for good friends to share good food and make new memories.” —KIRKUS REVIEWS

“There is much to admire and sigh over in this appetizing mystery.”
—Connie Fletcher, BOOKLIST 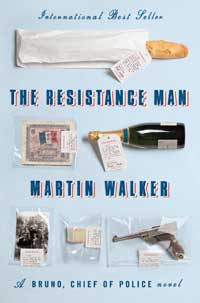 From the first lines of the book: As if determined to make it his last sight on earth, the dead man clutched what at first appeared to be a small painting on canvas or parchment. Bruno moved closer and saw that it was no painting but rather a large and beautiful banknote, nearly twice the size of the undistinguished but familiar euro notes in his wallet.”