WHAT: EVERYBODY’S FOOL, a novel

WHERE: The story is set in North Bath, New York.

WHY: “Satisfying, hilarious, and painlessly profound.
“A sequel to the great Nobody’s Fool checks in on the residents of poor old North Bath, New York, 10 years later.
“In his breakout third novel, Russo introduced a beat-up cast of variously broke, overweight, senile, adulterous, dissolute, and philosophical citizens of a ruined resort town, living out their luckless lives between a bar known as the Horse and a diner called Hattie’s Lunch. Cock of the walk was Sully, the gruff but softhearted practical joker/construction worker played by Paul Newman in the movie.
“Now past 70, Sully is back with a nest egg (his 1-2-3 trifecta came in twice; his landlady left him her house), serious health problems, and a dog named Rub. Since his best friend is a mentally challenged dwarf also named Rub, this causes confusion. Wisely, Russo moves Sully off center stage and features one of his nemeses from the first book, a pathetic police officer named Douglas Raymer (Philip Seymour Hoffman in the film). Raymer is now the Chief of Police, and the novel follows him and other characters through an action-packed two-day period that includes a funeral, a building collapse, an escaped cobra, a grave robbery, multiple lightning strikes, assaults, and auto thefts, strung together with the page-turning revelations about the characters’ private lives Russo does so well.
“Now it’s the 1990s, so the characters’ weaknesses include hoarding, OCD, depression, sex addiction/impotence, and a mild case of multiple personality disorder. Chief Raymer is tormented by his beautiful wife’s horrible death, by a sophisticated colleague from the yuppie town next door, and by the malaprop motto he accidentally had printed on his campaign cards: ‘We’re Not Happy Until You’re Not Happy.’ Who is this Douglas Raymer, his English teacher used to write on his papers, and it will take a whole lot of hell breaking loose for him to find the answer.” —KIRKUS, starred review

“Russo’s reunion with these beloved characters is genius:
silly slapstick and sardonic humor play out in a rambling, rambunctious story that poignantly emphasizes the particular brand of loyalty and acceptance that is synonymous with small-town living.” —Carol Haggas, in a starred review for BOOKLIST

“A shaggy dog story of revenge and redemption.”
—PUBLISHERS WEEKLY, Pick of the Week 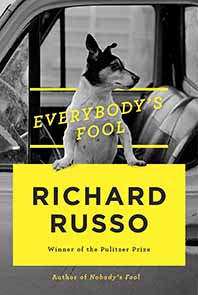