WHY: “Four potent and surprising tales of midlife crises from the ever-dependable Russo.
“He is superb at finding spots of comedy in these situations… With a keen eye for detail, dashes of humor, and a knack for bouncing his characters’ presents against their pasts, Russo makes these stories robust studies about the regrets they’ve picked up over the years… He rarely wastes a word, interweaving details and dialogue into master classes on storytelling.” —KIRKUS, a starred review

“A cohesive and astute collection.
“Russo eschews the middle-class working Everyman he portrays in such novels as Everybody’s Fool and revisits ground familiar to fans of his academic satire, Straight Man, and the poignant Bridge of Sighs. In doing so, he probes the tender egos and fractured psyches of academics and writers and ponders the tenuous ties that bind brother to brother, father to son, husband to wife.
“The lopsided world of the modern university is exposed when a professor’s confrontation with a plagiarizing student challenges her own career and marriage in ‘Horseman,’ while a semiretired professor is conned into accompanying his brother on a trip to Venice, where the exotic change of scene serves only to remind them of failed relationships at home and abroad. A struggling real-estate agent faces an emotional and physical crisis in ‘Intervention,’ while an erstwhile screenwriter navigates Hollywood’s mercurial egos in ‘Milton and Marcus.’
“Getting into the minds of Russo’s characters, no matter their background, is a singularly satisfying journey. Very few writers so thoroughly embrace human foibles, or present them in such an accepting and empathic manner.”
—Carol Haggas, in a starred review for BOOKLIST

“The four stories in Russo’s new collection are all winners, and one is a standout. Russo develops these stories with smooth assurance, allowing readers to discover layers of meaning in his perfectly calibrated narration.” –PUBLISHERS WEEKLY 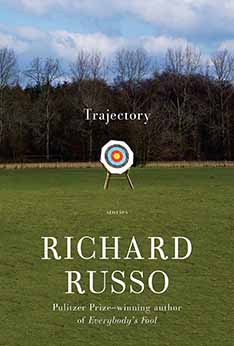