Media Center: ‘Most of Nora Ephron’

WHAT: THE MOST OF NORA EPHRON

WHERE: New York and Los Angeles

WHY: “A delightful collection from a unique, significant American writer…a year after her much-mourned death.
“Reading nearly 600 pages of Nora Ephron in one volume is a joy, not only due to the range of her interests, her capacious mind, her mixture of humor and satire and self-deprecation, but also her skill as a stylist. Few writers of Ephron’s range and output have written so few clunky sentences or so many memorable ones.” —KIRKUS, a starred review

“Since we will never have enough of Nora Ephron, the most will have to do.
“A treasury of Ephron, this collection contains the writer’s best essays, from Crazy Salad to I Remember Nothing, her one-and-only novel, Heartburn, her legendary screenplay, When Harry Met Sally, a selection of her blog entries from the Huffington Post, and her never-before published play, Lucky Guy, about New York City’s tabloid journalism.
“Representing 40-plus years of work, this volume illustrates not only Ephron’s dynamic writing career as a journalist-turned-novelist-turned-filmmaker but also her incredible wit. Whether Ephron is writing about politics or purses, sexism or souffle, her appeal is her intelligent, incisive sense of humor. This is also part of what makes her such an icon, not ‘for America’s women,’ as editor Robert Gottlieb writes in his introduction, but for America. Women may idolize her—she is the major inspiration for funny girl Lena Dunham, creator of the HBO hit Girls—but through her writing and films, she has changed the actual timbre of American humor.”
—Meagan Lacy, in a starred review for LIBRARY JOURNAL 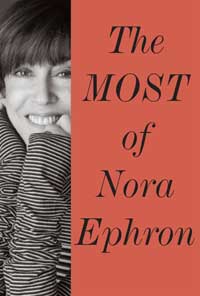 “No matter how versed in Ephron’s cherished work a reader may be, she or he will be dazzled and touched anew by this life-spanning, life- embracing collection that so richly showcases her clarity, brio, and candor.” —Donna Seaman, BOOKLIST

“‘Everything is copy,’ Ephron’s mother always said. This collection fulfills that motto with aplomb, and will likely serve as a perfect holiday gift for Ephron fans.”
—PUBLISHERS WEEKLY, in a featured boxed review

Media Resources:
About the book | About the author | Read Robert Gottlieb’s Introduction | Read an excerpt | Download the jacket or the author photo | Listen to the AudioBook