‘Jungle Grows Back’ by Robert Kagan

WHAT: THE JUNGLE GROWS BACK:
America and Our Imperiled World

WHERE: The author lives in Virginia.

WHY: “An eye-opening assessment.
“For more than 70 years, Europe has avoided a war among the great powers; in East Asia, there has been a general peace for more than 60 years; and both regions have seen unprecedented economic growth. The blessings of prolonged peace and prosperity were not inevitable, according to Kagan, a senior fellow at the Brookings Institute and a columnist for the Washington Post.
“Rather, history shows that the current era is a happy aberration. The normal condition of Europe for much of the past two thousand years is one of war and chaos. That ‘jungle’ has been pushed back by the implementation and maintenance of the liberal world order, with the U.S. as its lodestone. That rule-based system commits nations involved in it to democratic principles, respect for national borders, independent judiciary, and relatively free movement of goods and ideas, and the U.S. has helped sustain it.
“Kagan perceives that weakness within the system now is exacerbated by Trump attacking both its military and economic bases, and that leads him to present a scary case for accelerated resurgence of the ‘jungle’.”
–Jay Freeman, BOOKLIST

The American-led liberal world order was never a natural phenomenon. It was not the culmination of evolutionary processes across the millennia or the inevitable fulfillment of universal human desires. The past seven-plus decades of relatively free trade, growing respect for individual rights, and relatively peaceful cooperation among nations—the core elements of the liberal order—have been a great historical aberration. Until 1945 the story of humankind going back thousands of years was a long tale of war, tyranny, and poverty. Moments of peace were fleeting, democracy so rare as to seem almost accidental, and prosperity the luxury of the powerful few. Our own era has not lacked its horrors, its genocides, its oppressions, its barbarisms. Yet by historical standards, including the standards of the recent past, it has been a relative paradise. Between 1500 and 1945 scarcely a year passed when the strongest powers in the world, the great powers of Europe, were not at war, but since 1945 there have been no wars among the great powers. The great Cold War confrontation between the United States and the Soviet Union ended peacefully, a historical rarity. Meanwhile, deaths from all recent smaller wars have declined dramatically, as indeed have violent deaths of all kinds. Since the end of the Second World War the world has also enjoyed a period of prosperity unlike any other, with more than seven decades of global GDP growth averaging almost 3.5 percent per year, despite the 2007–2008 financial crisis. Since 1945, some four billion people around the world have climbed out of poverty. The number of democratic governments has grown from no more than a dozen in 1939 to more than a hundred today. The power of the state has been curbed in favor of the individual in large parts of the world, and an ever-expanding panoply of individual rights has come to be respected. What Abraham Lincoln called the “better angels” of human nature have been encouraged, and some of human beings’ worst impulses have been suppressed more effectively than before. But all this has been a great aberration, an anomaly in the recorded history of human existence. The liberal world order is like a garden, ever under siege from the forces of history, the jungle whose vines and weeds constantly threaten to overwhelm it. 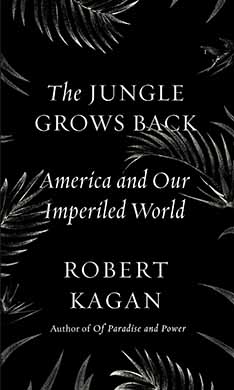