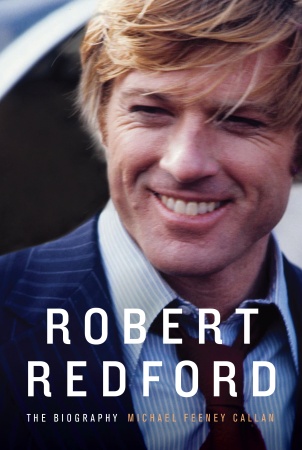 “Revealing…A comprehensive portrait of a man beset by colliding tides of ambition and hesitation…Robert Redford is as fascinating…as its subject.”

Photos from the book:

Among the most widely admired Hollywood stars of his generation, Redford has appeared onstage and on-screen, in front of and behind the camera, earning Academy, Golden Globe, and a multitude of other awards and nominations for acting, directing, and producing, and for his contributions to the arts. His Sundance Film Festival transformed the world of filmmaking; his films defined a generation. America has come to know him as the Sundance Kid, Bob Woodward, Johnny Hooker, Jay Gatsby, and Roy Hobbs. But only now, with this revelatory biography, do we see the surprising and complex man beneath the Hollywood façade.

From Redford’s personal papers—journals, script notes, correspondence—and hundreds of hours of taped interviews, Michael Feeney Callan brings the legendary star into focus. Here is his scattered family background and restless childhood, his rocky start in acting, the death of his son, his star-making relationship with director Sydney Pollack, the creation of Sundance, his political activism, his artistic successes and failures, his friendships and romances. This is a candid, surprising portrait of a man whose iconic roles on-screen (Butch Cassidy and the Sundance Kid, All the President’s Men, The Natural) and directorial brilliance (Ordinary People, Quiz Show) have both defined and obscured one of the most celebrated, and, until now, least understood, public figures of our time.

“An all-American beautiful jock with a brutal iron will and the soul of a visionary tyrant, Redford emerges as a sui generis American figure. A gripping, intimate treatment of one of cinema’s last great iconic stars.” —Kirkus Reviews

“Underneath the blond surfer look has always been an iconoclast, less interested in money and fame than integrity and artistic expression…Michael Feeney Callan makes a strong case that Redford is one of the most influential movie figures of the past 50 years. Who else has had so much impact as an actor, director, producer, social activist and head of a self-made creative empire…Callan writes fluidly and tells plenty of interesting stories.”—Bloomberg

Michael Feeney Callan is the author of a collection of short stories, for which he won the Hennessy Literary Award, two novels, and several plays, as well as biographies of Anthony Hopkins, Richard Harris, Julie Christie, and Sean Connery. He has worked for the BBC, Ireland’s Ardmore Studios, and PBS as a writer, producer, and director of television dramas and documentaries. He lives in Dublin, Ireland.

Meet Callan on his book tour