WHAT: VANISHING GAMES, a novel

WHERE: The story is set in Hong Kong and Macao.

WHY: “An irresistible ride.
“A shipment of incredibly valuable uncut sapphires, smuggled out of Burma and hijacked by pirates in the South China Sea, provides the MacGuffin for Edgar-finalist Hobbs’s fantastic sequel to 2013’s Ghostman.
“Enter a pair of professional thieves, Jack (aka Mr. Outis/Ghostman) and his onetime mentor, now partner, Angela. Each of them is a master of disguise, able to alter posture, attitude, accent, and expression to suit the moment. Equipped with an array of false passports, they move through the glamorous world of the super-rich in Hong Kong and Macao. Jack has no qualms about killing and does his share. Yet Hobbs stops the action, when he sees fit, in the most amazing fashion. In one scene, Jack and a professional assassin pause to discuss Greek mythology and the story of the cyclops Polyphemus for several pages before resuming their battle to the death.”
—PUBLISHERS WEEKLY, a starred review

“A brilliant throwback to pulps while at the same time cutting edge fiction.
Vanishing Games is a thriller with teeth…Meaty, violent and riveting. It boasts a page-burner of a plot that relies on the conventions of Ghostman — heist gone bad, revenge, missing loot, stopwatch action — without being repetitive or redundant.
—Robert Anglen, ARIZONA REPUBLIC 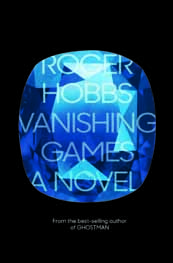