Media Center: ‘Madonna on the Moon’ by Rolf Bauerdick

WHAT: MADONNA ON THE MOON, a debut novel

WHERE: Set in a fictitious village in the Carpathian Mountains.

WHY: “A lightly absurdist coming-of-age tale driven by the confusions of communism, religion, and the space race.
“The story opens in 1957, as young narrator Pavel observes his family and neighbors dispute the meaning of the second Sputnik launch. Communism thus far has been a distant drumbeat in the town of Baia Luna, but its threats soon draw closer: The local priest is found murdered, and Pavel’s teacher is discovered hanged.
“What ensues is largely a detective story, led by Pavel, involving the sexual peccadillos of Communist Party functionaries, complete with sordid photos and anguished diary entries. He won’t grasp the full extent of the drama till communism’s fall three decades later, but the story is leavened by a subplot involving Pavel’s grandfather’s determination to understand the fate of the Virgin Mary. In numerous set pieces, he argues with a local Gypsy about whether the holy mother ascended to the moon and whether the U.S. and Soviet space missions are really just efforts to prove (or disprove) her existence. As the men hunker down over Bibles and telescopes, Bauerdick reveals the bubble of ignorance that surrounded those living under communism, and he explores the push and pull between faith and growing totalitarianism. 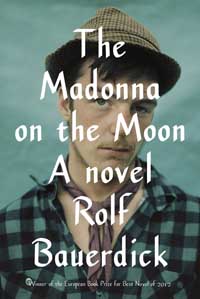 “The novel captures the way communism slowly ground down its subjects, yet it doesn’t feel like a falsely inflated epic, and the comic passages involving Pavel’s grandfather give the story a likable, quirky tone. Baeurdick finds an off-kilter way to explore a dour period in history.” —KIRKUS REVIEWS

About the author: Rolf Bauerdick was born in 1957. He studied literature and theology before turning to journalism and photography. His work has been awarded numerous prizes among them Germany’s prestigious Hansel Mieth Prize. His articles have been published in Der Spiegel, Geo, and Playboy among other publications. He lives in a converted flour mill in Northern Germany with his wife and children. This is his first novel.

Translated from the German by David Dollenmayer.

Media Resources:
About the book |  Download the jacket or the author photo

Tags: Fiction, Knopf, Madonna on the Moon, Novel, Rolf Bauerdick, Translation
Posted in Media Center, Not on Homepage | No Comments »