WHAT: PATIENT X:
The Case-Book of Ryunosuke Akutagawa

WHERE: The author lives in Tokyo.

WHY: “An imaginative glimpse behind the curtain of a sheltered, definitively troubled writer of a century past…Quiet homage to the progenitor of the modern Japanese short story.” –KIRKUS REVIEWS

A CONVERSATION WITH THE AUTHOR

A: In the early-Eighties, while still living in the North of England, I first saw Kurosawa’s RASHOMON on a late night television double-bill with THE OUTRAGE, its Western remake. At that time, I doubt I realized the Kurosawa film was based on two stories by Akutagawa, however I am sure it was the film which then drew me to a rather gaudy Tuttle book called RASHOMON in the Kinokuniya Bookstore in Shinjuku, Tokyo, soon after having moved to Japan in 1994. I distinctly remember wondering whether or not to buy the book as I really didn’t care for the cover but, having stood there reading the introduction by Howard Hibbert, I finally relented. This very slim edition contains only six stories, each one based on retellings of classical Japanese tales, but reading IN A GROVE would change my life; it was one of the most radical reinventions of narrative and story-telling I had ever encountered. From that moment on, I sought out as much of Akutagawa’s work (in translation) as I could find, becoming particularly haunted by KAPPA, the satirical novella from the last year of his life, and which, again in a Tuttle edition, contained a detailed and fascinating biographical introduction by G.H. Healey. And so for almost twenty-five years now, Akutagawa has been a constant presence and an inspiration.

Q: Akutagawa’s legacy can be felt not only in your own work, but in the broader world of literature and film as well. What is the big picture of his legacy?

A: In Japan, at the time of his suicide in 1927, Akutagawa was the most well-known writer of his day and so his death was a national sensation, and was even reported in the London and New York Times. During his lifetime, he’d also been the central figure of the literary world, a close friend of Tanizaki and Kawabata, and so, quite soon after his death, the Akutagawa Prize was founded in his memory and it has become the country’s most prestigious literary award. Many of his stories are required reading for schoolchildren in Japan, as the acknowledged “master of the Japanese short story,” and so he remains a household name. Recently, he has also become a leading character in the popular manga and anime series, BUNGO STRAY DOGS, and the anniversary of his death, July 24, is celebrated as “Kappa Day.”

In China, it was actually Lu Xun — arguably the country’s greatest 20th Century writer — who first translated Akutagawa, and Lu Xun’s own OLD STORIES RETOLD, for example, were surely inspired by Akutagawa. In Latin Ameri- ca, Jorge Luis Borges was an early champion of “the enchanting and sometimes terrifying books” of Akutagawa.
In the English language, Akutagawa was already being translated during his lifetime. However, in Europe and the United States, his legacy does seem to be dependent on the influence of Kurosawa’s RASHOMON. I confess I find it somewhat frustrating that the author of the two stories which form the basis of the film, and were thus the direct inspiration for its structure, is less well-known in his own right. I would also argue the film and its original texts have been frequently misinterpreted, with the so-called “Rashomon effect” now shorthand for a postmodernist notion that “there is no truth.”

Rather, I would suggest that the original story IN A GROVE predicts the world in which we live now – a world of collapsed narratives, post-truths and fake news – with each of us trapped inside the hell of our own subjectivity.

Q: Many readers will know you first and foremost as a writer of critically-acclaimed crime novels. Why this deviation? And is it really such a deviation after all – or will readers find commonalities between Patient X and your previously-published titles?

A: Well, actually, a quote from Akutagawa begins TOKYO YEAR ZERO and the narrative structure of OCCU- PIED CITY was directly inspired by IN A GROVE and RASHOMON, and so Akutagawa has been an influence for a long time now. PATIENT X is an attempt to paint a portrait of Akutagawa’s life and times just as RED OR DEAD was an attempt to paint a portrait of Bill Shankly’s life and times, and so then, on one level, both these last two books could be categorized as fictional biographies. Also, one of the tales within PATIENT X – “Jack the Ripper’s Bedroom” – draws on much of the research I’d done years ago into the Victorian Ripper and takes its title from a painting by Walter Sickert which I’d first seen in the Manchester City Art Gallery when I was at university there in the late-Eighties. And so PATIENT X doesn’t feel much of a deviation to me, rather a pro- gression – hopefully – on the path I’ve been on for a while now. Finally, though, I would say that the common- ality between all the books I’ve written is that, at heart, they are all mysteries…

Q: Patient X is a book that, in many ways, defies categorization. How do you most hope that readers will approach this novel? Is it a biography, a short story collection, or is it something else entirely?

A: First, I am grateful to any reader who reads my work, and so am loathe then to tell them how they should approach or read the work, simply hoping it proves an engaging, moving experience which might also pass on some of the things I learnt during the writing.

That said, I did approach PATIENT X as “a novel told in tales,” inspired by the Italian genre of the “romanzo di raconti,” and which seemed the most appropriate form to use in trying to paint my portrait of Akutagawa. I hope each tale in itself is engaging but which then together, in the end, might illuminate a larger picture and understanding of Akutagawa and of the times in which he lived.

Of course, I also hope PATIENT X will bring new readers to Akutagawa’s own work and would particularly recommend RASHOMON & SEVENTEEN OTHER STORIES, translated by Jay Rubin, published by Penguin in 2006.

Q: A major theme explored in Patient X is literary influence – how stories are borrowed from and transmuted by storytellers around the world and across generations. How is your own storytelling in Patient X a reflection of the storytelling style Akutagawa employed?

A: Akutagawa grew up in a world of books and was lauded as “the most well-read man of his generation.” His own writing began with retellings of classical Chinese and Japanese tales, but often rewritten under the influence of Western authors such as Poe, Baudelaire or Dostoevsky, creating a remarkable, eclectic fusion of the indigenous and the foreign, the old and the new. These stories made him very popular during his lifetime, but critics often derided his work as being merely collages of past works lacking in originality. Yet, I would argue his use of the stories and fragments of the past made him central to the global simultaneity of Modernism, alongside contemporaries such as Pound and Eliot, for example, respecting and using the traditions of storytelling while still “making it new”. In this, he was resistant to the cult of “absolute originality” which has obviously, ultimately triumphed and, sadly, still defines art and literature. Later, though, and under pressure from his critics, his work did become more autobiographical, yet it always remained very fragile and fragmented in structure.

In each book I’ve written, I’ve always tried to find the style and technique most appropriate for its subject.
In PATIENT X, I chose to divide the narrative into multiple, ostensibly independent short stories to represent Akutagawa’s own preoccupation with the short story. And then within each tale, I have tried to reflect the tech- niques he himself used, retranslating, retelling his own work while adapting it to create a portrait of the author and his times.

On occasion, Akutagawa was dismissed as a “mosaicist” but, in fact, that is how I approached the work, word by word, line by line and piece by piece, sometimes borrowed from his own work, sometimes not, constructing a mosaic which, when one stands back, hopefully reveals the man and his times.

Q: Why write about Akutagawa now? What makes these stories of Akutagawa’s life resonant even with the modern reader?

A: I began the manuscript of PATIENT X more than ten years ago, though very little of the early drafts remain in the finished novel. However, the earthquake and tsunami of March 11, 2011, prompted me to write the story which became the AFTER THE DISASTER, BEFORE THE DISASTER chapter; I was asked to contribute a story to MARCH WAS MADE OF YARN (Vintage, 2012), an anthology of reflections on the catastrophe of March 11, and I was drawn to Akutagawa’s own response to the Great Kanto Earthquake of 1923. Since then, both in Japan and internationally, I feel that the correspondences between Akutagawa’s times and our own have, sadly, become increasingly more pronounced: global, political, and economic uncertainty, the return of populist nationalism and trade wars, rapidly changing technology, particularly in media and communications.

Ultimately, tragically, Akutagawa was torn apart by his times, and his life and his fate, and the lives and fate of his country, should serve as a lesson and a warning to us all.

As Lu Xun wrote, “I am well aware that the past has already passed and that there is no way to chase after ghosts and spirits. Yet one cannot break with the past so absolutely. I still want to gather the remains, to build small graves, new graves, burying and memorializing at once.” And to which I would add, we must learn and then act as we remember and mourn. 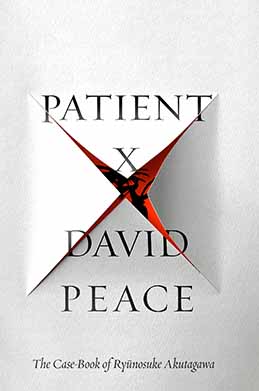