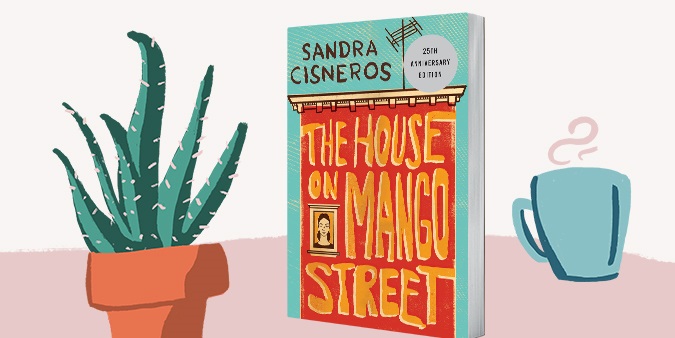 First published in 1984, Sandra Cisneros’ The House on Mango Street has become a true modern classic. This coming-of-age story is acclaimed by critics, taught in both grade schools and universities, and beloved by readers of all ages. Told in a series of vignettes—sometimes heartbreaking, sometimes deeply joyous—Cisneros’ masterpiece tells the remarkable story of Esperanza Cordero, a young Latina girl growing up in Chicago, inventing for herself who and what she will become. With nearly seven million copies sold, and translated into more than two dozen languages, this is a life-changing story of childhood and self-discovery.

This fall, both The House on Mango Street and its Spanish translation La casa en mango street (translation by Elena Poniatowska) are on the list of new titles included in the NEA Big Read.

We hope you will join Sandra, Marie, and the rest of us in reading (or revisiting) The House on Mango Street and discussing it at this meeting of the Knopf Doubleday Publishing Group’s How Have I Not Read This? book club. Read along with us at #HowHaveINotReadThis

• THURSDAY, OCTOBER 14. Register here and add to your calendar.

• Hosted in partnership with Palabras Bilingual Bookstore. You can order The House on Mango Street, or La casa en mango street, from them HERE.

Sandra Cisneros was born in Chicago in 1954. Internationally acclaimed for her poetry and fiction, which has been translated into more than twenty-five languages, she is the recipient of numerous awards, including the National Medal of the Arts, the PEN/Nabokov Award, and a fellowship from the MacArthur Foundation. Cisneros is the author of The House on Mango Street, Caramelo, Woman Hollering Creek, My Wicked Wicked Ways, Loose Woman, Hairs/Pelitos, Vintage Cisneros, Have You Seen Marie?, A House of My Own, and Puro Amor, a bilingual story that she also illustrated. Her most recent book is the dual language Martita, I Remember You / Martita, te recuerdo. Cisneros is a dual citizen of the United States and Mexico and makes her living by her pen. Learn more about Sandra at https://www.sandracisneros.com/.

Marie Arana is the author of numerous books—nonfiction and fiction—on Latin American history and identity. Among them are her memoir, American Chica; the biography Bolívar: American Liberator; a novel set in the Amazon jungle, Cellophane; and, most recently, Silver, Sword, and Stone: Three Crucibles in the Latin American Story. She is the inaugural Literary Director of the Library of Congress, former Editor in Chief of Book World at the Washington Post, and a former editor and vice-president at two major publishing houses, Simon & Schuster and Harcourt Brace Jovanovich. Among numerous honors, she has been a finalist for the National Book Award, a winner of the Los Angeles Times Book Prize for biography, and winner of the American Library Association’s Top of the List award in nonfiction. In 2020, she received a literature award from the American Academy of Arts and Letters. She currently serves on the boards of PEN America, the Authors Guild, the Library of Congress Madison Council, the PEN/Faulkner Foundation, the American Writers Museum, and the United States Southern Command. Learn more about Marie at https://mariearana.net/.