WHAT: NORTHERN ARMAGEDDON:
The Battle of the Plains of Abraham
and the Making of the American Revolution

WHERE: The story is set in and around Quebec.

WHY: “Masterful…
a superbly researched and written account
of a seminal episode in world history.
“In 1759, the town of Quebec, situated on bluffs above the St. Lawrence River, was the political and military heart of the French empire on the North American mainland. After five years of varying fortunes, the British victory on the Plains of Abraham just outside the town was the decisive battle leading to the seizure of Quebec, eventual victory in the so-called French and Indian War, and British domination of North America east of the Mississippi River.
“The battle itself, lasting between 15 to 20 minutes, is often portrayed as an easy rollover preceded by a daring and brilliant scaling of the bluffs by British troops. As MacLeod’s masterful survey indicates, however, the British triumph was the product of prolonged and sometimes misguided planning, an extended and frustrating siege, meticulous coordination between land and sea forces, and blind luck.
“MacLeod, a historian at the Canadian War Museum, relies heavily on original sources from both sides, including dispatches, letters, diaries, and memoirs. We glean a great deal about the major players, including the fatally wounded commanders, Montcalm and Wolfe, as well as ‘lesser’ participants, including French and New England colonists and even a Huron warrior.” —Jay Freeman, in a starred review for BOOKLIST

“MacLeod draws on an impressive array of firsthand sources
and writes with a keen eye for the dramatic.” —PUBLISHERS WEEKLY

“An intricate, enlightening account.
Students of American history will appreciate the detail and the thoroughness of this account of what Churchill called the ‘first world war.'” —KIRKUS REVIEWS 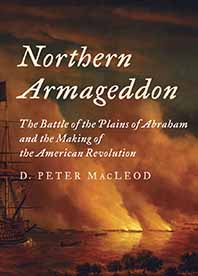 From the beginning of the book: Best known as a clash between French and British armies, the Plains of Abrahams was also an American battle. One in every three soldiers in the British army at Quebec had been recruited in the American colonies. Hundreds more Americans served aboard British warships and the transports from Boston, New York, and Philadelphia that carried part of that army up the St. Lawrence River. During the campaign, the northern colonies played a role similar to that of Britain at the time of the Allied invasion of Europe in 1944 by providing a nearby land base for a great amphibious offensive.
Rangers and Royal Americans apart, colonial soldiers and sailors are almost invisible in accounts of the beachheads and battlefields of the Quebec campaign. Yet they were there for every landing and every battle, and their actions shaped the course of American history.