WHAT: REPORTER, a memoir

WHY: “One of the most skilled investigative journalists in American history shares his saga in compelling detail…Rarely has a journalist’s memoir come together so well, with admirable measures of self-deprecation, transparent pride, readable prose style, and honesty.”
–KIRKUS, a starred review

“Hersh is brash and direct, but never cynical, and his memoir is as riveting as the great journalistic exposes he produced.” –PUBLISHERS WEEKLY, a starred review

“Journalism junkies will devour this insider’s account of a distinguished career.
“Perhaps he had a knack for being in the right place at the right time. Perhaps it was his reporter’s well-honed instinct for a great story. Whatever the reason, Hersh became a pioneer in the field of investigative journalism, garnering a reputation for uncompromising adherence to truth and tireless quest for accountability in the often duplicitous realms of national security and politics. Hersh’s persistent reporting peeled back the veneers masking some of the most controversial issues of our time, from the Vietnam War massacre at My Lai to the Iraq War military atrocities at Abu Ghraib.
“In this candid and revelatory memoir, Hersh chronicles his evolution as a reporter in both style and substance, focusing on his dogged pursuit of leads, nuanced cultivation of reliable resources, and often fraught relationship with editors, colleagues, and critics. Compared to the contemporary field of blogs, bots, and opinion-driven reportage, the last half of the twentieth-century can look like the heyday of honest and critical journalism. But even now, Hersh remains at the vanguard of tenacious and purposeful writers who speak truth to power, and surely he’s inspiring the best at work now.”
–Carol Haggas, in a starred review for BOOKLIST
. . . . .

I am a survivor from the golden age of journalism, when reporters for daily newspapers did not have to compete with the twenty-four-hour cable news cycle, when newspapers were flush with cash from display advertisements and want ads, and when I was free to travel anywhere, anytime, for any reason, with company credit cards. There was sufficient time for reporting on a breaking news story without having to constantly relay what was being learned on the newspaper’s web page. There were no televised panels of “experts” and journalists on cable TV who began every answer to every question with the two deadliest words in the media world — “I think.” We are sodden with fake news, hyped-up and incomplete information, and false assertions delivered nonstop by our daily newspapers, our televisions, our online news agencies, our social media, and our President. 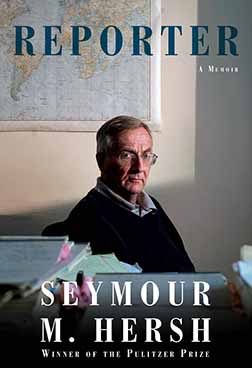