WHAT: ARIK, a new biography by David Landau

WHY: “An outstanding, warts-and-all portrait.
“Since his massive stroke in January 2006, Ariel Sharon has remained in a persistent vegetative state. Given the strong passions and controversy he engendered as both a military and political leader, it is perhaps surprising that many Israelis from each side of the political divide look back on his career and personality favorably.
“David Landau has written for both Right and Left newspapers in Israel and is currently the Israel correspondent for the Economist. His thorough, balanced, and scrupulously fair biography makes clear why Sharon was capable of winning respect and admiration, even from his staunch political opponents. In recounting Sharon’s youth, Landau reveals Sharon as always prepared to swim against the tide, as he and his family resisted the pressures of nearby kibbutzim to maintain the independence of their farm. As a military leader, he was rash, occasionally brutal, and sometimes defiant of superiors, but at critical moments, especially during the Yom Kippur War, he was decisive and brilliant. As prime minister, despite his earlier promotion of settlement activity, he dismantled settlements and withdrew from Gaza. This is an outstanding, warts-and-all portrait of an arguably great, if not a particularly likable, Israeli leader.” —Jay Freeman, in a starred review for BOOKLIST

“A thorough, extremely candid description and assessment of the military and political lives of the controversial Sharon.” —KIRKUS, a starred review

“A truly human portrait of one of
Israel’s greatest and most controversial leaders.
Most fascinating is Landau’s analysis of Sharon’s transition from being the ‘father of the settlements’ to being the leader most responsible for removing Jewish settlements from Sinai, Gaza, and some of the West Bank… Replete with both footnote explanations of everything from Hebrew terms and acronyms to the past affiliations of political players and endnote source citations, the book also has an appendix containing the full text of significant documents pertaining to the Israel-Palestine conflict since 1967.” —Joel Neuberg, LIBRARY JOURNAL 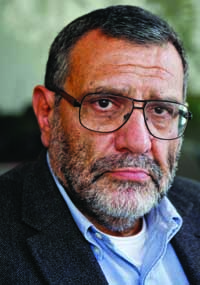 Media Resources:
About the book | Read an excerpt | Download the jacket or the author photo