WHAT: THE NEW SILK ROADS:
The Present and Future of the World

WHERE: The author lives in Oxford.

WHY: “Provocative reading
for a glimpse at the new world to come.
“The world is undergoing a geopolitical realignment — and the West isn’t quite ready for the consequences. Donald Trump may be preaching a near-isolationist line in foreign policy, but in 2007, he was busily trademarking his name across the nations of Central Asia, Iran among them, ‘with the intention of producing name-brand vodka,’ to say nothing of hotels and casinos. His vehicle, the Silk Road Group, ‘has subsequently become the focus of considerable media scrutiny,’ writes Peter Frankopan in this engaging survey.
“If the intensity of American interest in some of those nations has lessened, other countries are paying attention — including, notably, China. Remarks one government official, ‘we Chinese often say that if you want to get rich, build roads first.’ Indeed, China has been building new highways and railway lines throughout the country and beyond its borders, forging direct links with the lucrative markets of Europe and the rich resource-producing nations of Africa. In the latter, Djibouti makes an interesting case in point for Frankopan. Strategically located on the Horn of Africa, it is a natural terminus for highways that might one day radiate across the continent, and it is awash with foreigners: The U.S. has a military base there, but China is building one, too, while France and even Japan have troops there. Meanwhile, not to be left out of the enterprise, Russia has been working in neighboring Somaliland to establish a military presence and is now set on ‘helping the breakaway republic establish its independence from Somalia and be internationally recognised as a sovereign state.’
“The course of realignment seems clear and inevitable, and ‘trying to slow down or stop that change is an illusion,’ Frankopan urges. Ignoring it doesn’t help, either…. Provocative reading for students of geopolitical and economic trends looking for a glimpse at the new world to come.” —KIRKUS REVIEWS

In the few short years since my previous book, The Silk Roads, was published, much has changed. From my perspective as a historian there have been a series of advances in how we can understand the past that are immensely exciting. Scholars working in different fields, on different periods and regions have produced work that is as innovative as it is compelling. Archaeologists using satellite imagery and spatial analysis have identified irrigation systems made up of cisterns, canals and dams dating to the fourth century AD that explain how crops were grown in inhospitable conditions in north-western China at a time when exchanges with the world beyond were beginning to rise.

Data from commercial and spy satellites, as well as from drones used in military surveillance in Afghanistan, has been tapped into by researchers working as part of the Afghan Heritage Mapping Partnership. This has resulted in the building up of a detailed picture of an infrastructure of caravanserais, water channels and residential complexes that once housed travellers in the centre of Asia, which helps transform how we understand the way in which the Silk Roads of the past were connected. The fact that much of this work has been done remotely also shows how the way in which research is done in the early twenty-first century is itself evolving. 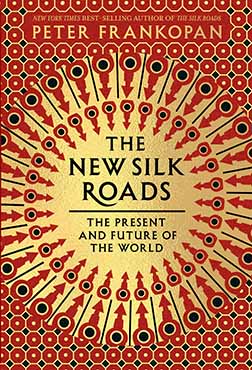