‘Sleeping With Strangers’ by David Thomson

WHAT: SLEEPING WITH STRANGERS:
How the Movies Shaped Desire

WHERE: The author lives in San Francisco

WHY: “Another essential volume from an essential writer.
“A veteran film critic and historian escorts us through cinema history to examine our sexual attitudes and appetites glowing in the dark. In his latest book, David Thomson, the author and editor of more than 20 books about film and TV, puts on display an array of his virtues as a writer: clear, precise language; vast knowledge of his subject (from books, screens, interviews, and friendships); an open sense of humor; and attitude.
“Though film history is the author’s principal interest here — and how the movies have affected our ideas about love and sex — he comments at times on contemporary issues, as well, including sexual harassment (Harvey Weinstein, Louis C.K., Kevin Spacey, and others) and the current occupant of the White House… As usual, Thomson pulls no punches and takes no shortcuts. His technique is to focus on specific, often iconic films — the creators, casts, and others involved — and to show how they have influenced the viewing public and the culture at large.
“Throughout, the author is a genial guide as he moves through the films and personalities, including, among dozens of others, Rudolph Valentino, Warren Beatty, Faye Dunaway, Jean Harlow, Tony Curtis, Jude Law, and Nicole Kidman. Thomson explores not just the on-screen sexuality of his principals, but also their off-screen, ‘real’ sexual identities. We learn a lot, for example, about who was gay, or possibly gay, and who was bisexual. We also see a lot of Weinstein-ian behavior that prevailed long before #MeToo: director Nicholas Ray having sex with the 16-year-old Natalie Wood; other dominant male figures—straight and gay—taking sexual advantage of their power.
“However, the author also reminds us that viewers are not innocent: We sit in the dark, watching, imagining, and enjoying the sex (he confesses to a number of his own youthful passions for film stars). Literate, frank, and sometimes graphic — another essential volume from an essential writer.” –KIRKUS, a starred review

“Fascinating and illuminating. Thomson is pretty much a walking encyclopedia of film history, and this is the kind of subject he can really sink his teeth into.”
—David Pitt, BOOKLIST

“Part personal moviegoing memoir, part deeply informed film history…Thomson deploys his encyclopedic knowledge of film so genially and dexterously that readers who are movie aficionados will want to rewatch their favorites through his eyes.”
—PUBLISHERS WEEKLY 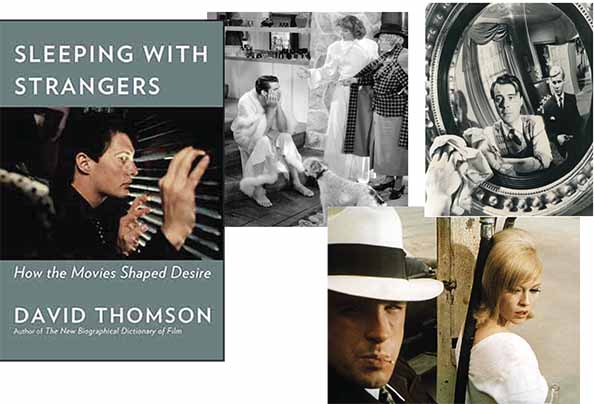