WHAT: WHO KILLED PIET BAROL? a novel

WHERE: The story is set in South Africa.

WHY: “An ambitious and memorable
tale of colonial greed in South Africa.
“With echoes of Paul Theroux’s Mosquito Coast, Mason unspools a story rich in detail and populated with deeply flawed characters whose lives intersect in the once-pristine forest that inspires acts sacred and profane. Mason handles multiple story lines with the élan of a seasoned raconteur.”
—PUBLISHERS WEEKLY

“Piercing…lavishly descriptive…captures the reader’s heart.
“Piet Barol, the charismatic hero of Mason’s History of a Pleasure Seeker, lives the good life in Cape Colony, South Africa, just before WWI. For five years, Piet and his wife successfully impersonate French aristocrats; then a poor economy catches them short.
“Their furniture store is failing when Piet learns about a vast forest of native mahogany. His obsession with harvesting the trees and creating high-end furniture at the expense of his social rival is the central focus of the story. Piet charms two young Xhosa men into guiding him to Gwadana (to ask the chief for trees), where his involvement with the tribal people foreshadows what is to come.
“The novel, piercing in its perceptions of South African history and the people whose lives were affected by the 1913 Natives Land Act, and lavishly descriptive of a country rich in culture and wildly lovely, subtly captures the reader’s heart. Then breaks it. With well-drawn, compelling characterization; a frank and refreshing sensuality that permeates every aspect of life; and a range of complexity surprising for the book’s short length, the novel turns the question posed by the title into a philosophical theme.
“Luminously reminiscent of Chinua Achebe’s Things Fall Apart and recalling the disastrous culture clash of Barbara Kingsolver’s Poisonwood Bible“.
—Jen Baker, in a starred review for BOOKLIST 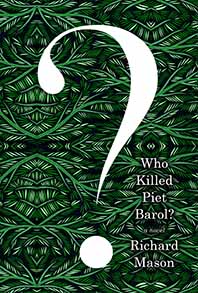