WHAT: INFINITE WONDER:
An Astronaut’s Photographs
from a Year in Space

WHERE: Out of this world

WHY: A breathtaking collection of photos taken by Kelly during his mission on the International Space Station.

A CONVERSATION WITH SCOTT KELLY

Q: How did you shoot these photos in space? What equipment did you use, and what adjustments did you have to make to photograph in zero-g going 17,000 miles per hour?

A: I used a Nikon D4 with a long 800mm lens and a 1.4x magnifying zoom lens, and had to pan the camera as the shutter released in order to compensate for the space station’s velocity. And I had to keep it all steady—a feat in the weightlessness of space. I practiced throughout my first stint on the space station, which was 150 days long, and by the time I went up for my year-long mission, I was as prepared as I could be. Taking pictures wasn’t really part of my work while on the space station—it was more of a hobby, and I’d grab the camera and shoot in the morning or after my work for the day was finished.

Q: What was your favorite thing about of taking pictures from space?

A: My favorite thing was the vantage point to take photos of the most beautiful and amazing planet that we know to exist, Earth. I also enjoyed the challenge of taking photos of a specific location on the planet. This was easier if there were good geographic reference marks or if the location was on a coastline. Sometimes I would try to get a photo of a specific spot, which was much more challenging. Coby, Kansas was my nemesis. I spent a lot of my spare time trying to capture an image of this small town in Kansas, the hometown of my sister in law, Gabby Giffords’ mother, Gloria. After nearly a year, I gave up. I also enjoyed making the artistic photos I refer to as Earth Art—I included many of those in this new book.

A: Seeing Earth from space, with no political borders, beautiful, yet fragile gives you a different perspective on life and the planet and its atmosphere. Some refer to this as the orbital perspective, a feeling that we are all connected, part of a team that needs to work together to solve are common problems. For example, when you see the atmosphere from space, it is almost scary how thin and fragile it appears, almost like a contact lens over someone’s eye.

Q: You have spoken about how you have seen Earth change since your first flight on Discovery in 1999. What specifically did you witness? How has this affected your thoughts about our environment, and why was that important for you to show in a few of the photos here?

A: The biggest change I noticed was the destruction of the rain forests in South America. My flights into space were progressively longer—8, 13, 159, and, finally, 340 days—so that gave me the chance to look at Earth over longer periods of time. It seemed to me that over the course of my 18 years of visiting space I would see more fires, more weird weather systems, like hurricanes in unusual places that I didn’t expect. I think it was important to highlight the fragility of the environment and our atmosphere in these photos because I do believe climate change is real and we need to address it.

Q: You have spent a lot of time since your return traveling around the world—hiking in Nepal and Iceland, and here in the U.S. in Colorado, Utah, California, and Hawaii, among other places. Did your time in space inspire any of these trips?

A: Absolutely. I have seen much of Earth from a unique vantage point and was privileged to do so, but seeing those places up close, meeting the people, learning about their cultures, the challenges of their lives is something you don’t get when you are 250 miles away and traveling at a blistering 17,500 mph. My time in space has inspired me to see the earth up close.

Q: After spending so long in space, what words of wisdom would you like to share with us earthlings?

A: When you are looking down on Earth from the space station, you don’t see borders or political factions. I recall passing over the Mediterranean one day—clear and stunningly beautiful from up there—and that night, learning on the news that a Syrian child, fleeing violence, had washed up on the shore in Turkey. Sometimes it was hard to understand how something that ugly could happen somewhere that looked so beautiful and peaceful from above. Looking at the earth as a whole from 250 miles up is the best reminder that we are all in this together—that what everyone on earth does, within the United States and across the globe—affects all of the world’s citizens, especially where our environment is concerned. I felt a kinship with everyone on earth while I was up there, a sense of togetherness and of how fragile our planet and humanity is. That’s something I’ve kept in mind now that I’m back on our solid ground. 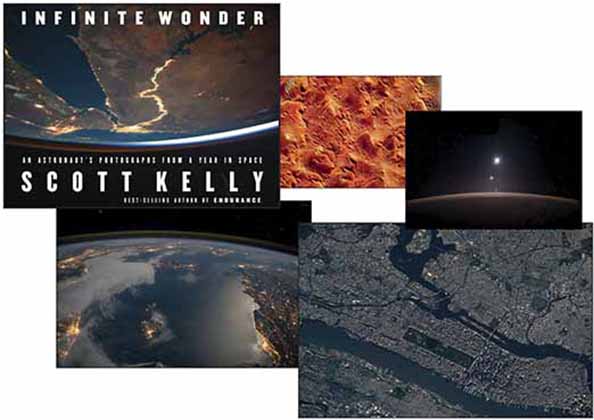