WHAT: THE GEORGETOWN SET:
Friends and Rivals in Cold War Washington

WHERE: Author tour to California.

WHY: “Not to be missed.
“Cold War America was largely shaped by a close-knit group of individuals known as the ‘WASP ascendancy’: well-off, well-educated journalists, politicians, and socialites who lived in Washington, D.C.’s Georgetown neighborhood. Herken goes into exacting detail in this excellent account, which focuses on the players themselves—their backgrounds, relationships, rivalries, scandals, and opinions on the policies and events that defined the era.
“Two principal players were the highborn brothers Joe and Stewart Alsop, whose newspaper column, ‘Matter of Fact,’ appeared in more than a hundred newspapers across the United States. Joe’s dinners, dubbed ‘zoo parties,’ served as alcohol-fueled salons for a tribe which regularly included such figures as George Kennan, Phil and Katherine Graham, and the CIA’s Frank Wisner.
“Herken covers, among a host of post-WWII milestones, the Marshall Plan, the Truman Doctrine, the founding of the CIA, McCarthyism, the Korean War, Vietnam, and Watergate. The skill with which he describes the players in Georgetown is not to be missed.” —PUBLISHERS WEEKLY, a starred review

“An intricate study of the personalities that shaped U.S. Cold War policy. Herken takes a rather clever idea promising titillating gossip among neighbors Joseph Alsop, Phil Graham and John F. Kennedy during the 1950s and ’60s and amplifies it into a spiraling delineation of the official American response to the perceived Soviet threat.” —KIRKUS REVIEWS

“Combining the social gatherings of the Georgetown elite and the serious matters it impacted, Herken provides an intimate perspective on Washington salons of power.” —Gilbert Taylor, BOOKLIST 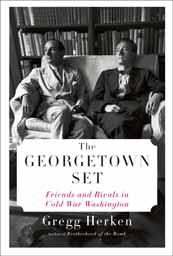