Media Center: ‘Innocent Have Nothing to Fear’ by Stuart Stevens

WHAT: THE INNOCENT HAVE NOTHING TO FEAR,
a novel

WHERE: The story is set in New Orleans.

WHY: “A fast-paced carnival
of bile, guile, and blow-ups.
“That title may be the biggest of this satiric thriller’s red herrings, since, as far as this book is concerned, there are no innocents in the political process. A charismatic right-wing Republican populist with a hectoring anti-immigrant riff is running for president, and the only person who can slow his roll is a woman moderate with ties to the outgoing administration.
“No, this book is not about the 2016 presidential campaign. But the fact that even these aspects of the novel are in sync with current events validates its author’s credentials as a cagey veteran political operative. That description applies to crafty, cynical J.D. Callahan, who normally would find a million reasons to avoid going back home to New Orleans except that it happens to be the site of a wide-open GOP convention pitting his candidate, incumbent Vice President Hilda Smith, against Colorado Gov. Armstrong George, who’s running on a platform powered by anti-terror paranoia as exemplified by what J.D. characterizes as ‘the crazy train of his wacky New Bill of Rights.’ Callahan’s efforts to match the Veep’s steely rationality against George’s xenophobic bluster are bumrushed by bombs scattered throughout Crescent City that panic the locals and scare some of the fence-sitting delegates into George’s rising column of support.
“As J.D. struggles to keep both his head and his client in the game, he’s also got to deal with vicious backbiting from within the Smith staff, somewhat irrational suspicions from the FBI that J.D. himself is somehow responsible for the bombs, a sexy gossip columnist with informed knowledge of serious firearms, and a pair of estranged half siblings with dubious issues of their own, one a pardoned felon seeking his brother’s help for a run at state office, the other an ex-GI-turned-skinhead strip-club owner.
“In an era as politically mercurial as our own, even the most far-fetched events depicted here sound utterly plausible — except for maybe one thing: moderate Republicans? Really? What are those?” —KIRKUS REVIEWS

“A suspenseful satire…Set in the very near future, this romp through high-stakes politics plays in interesting parallel to the antics of the current 2016 presidential race.” —Dan Kaplan, BOOKLIST 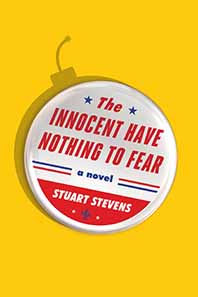