Carrie Brown: The View from Where I Sit

Carrie Brown’s novel The Last First Day tells the story of Ruth, a woman in the twilight of her life who’s been happily married to her husband for fifty years. But now that he’s about to retire from his position of headmaster of the Derry School, a Maine prep school for boys, she is wondering what they will do in their old age, separated from the place they’ve dedicated their lives to. The couple’s love for the school and its students stems from Carrie Brown’s own time at Sweet Briar College in Virginia, where she and her husband taught for many years. Read on for her moving, lyrical essay about how the college, pictured below in all of its verdant beauty, inspired this deeply felt novel. 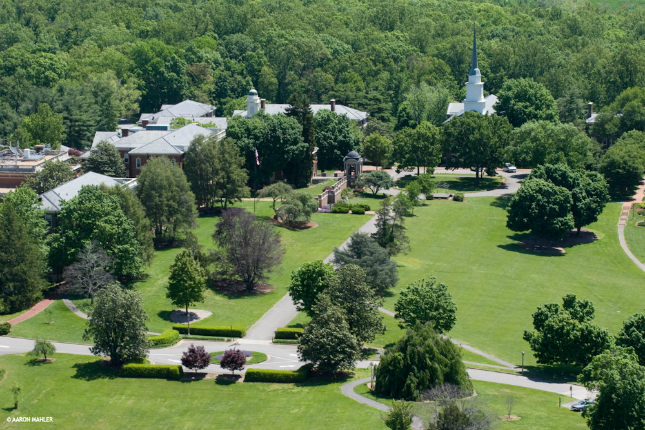 In the years when our marriage and our three children were young, my husband and I could afford a monthly babysitter or a dinner at a restaurant, but not both. We chose the babysitter, a blanket, two cold beers, the sunset, and a hillside from which we could look down through an opening in the trees onto the campus of the lovely college where we had recently made our home.

The campus, a cluster of century-old brick buildings on three thousand acres in the foothills of the Blue Ridge Mountains, lay nestled nearly a mile away below us in a rumpled green ocean of field and forest that rolled on unbroken toward the horizon. As night began to fall, lights gradually came on in the windows. We could pick out the chapel by its glowing spire, the library and dormitories and gym. By full dark, a constellation of lights seemed to float below us in a trick of perspective that somehow made the campus more distant and unreachable—like a city on an island glimpsed from an airplane—but also more achingly dear.

We were in love with each other and with the seductive power of that magical view, the enchanted, isolated world at our feet that seemed, especially at night, not quite real. As we lay on our blanket on the hillside, I thought of Wordsworth’s famous poem “Lines Written a Few Miles Above Tintern Abbey.” In it, the young poet looks down upon a view as sweet to him as our view was to us. “With an eye made quiet by the power / of harmony, and the deep power of joy,” he sees “into the life of things.”

The power of my feeling for that view from our hillside, along with my growing understanding of what it meant to commit oneself to the education of young people—to care for them, as closely as possible, as if they were your own—informed my portrait of the invented Derry School in The Last First Day, as well as the portraits of Peter and Ruth, the fictional couple who devote their lives to the school and its students.

Any novel, any work of literature, seeks in some way to see clearly into “the life of things.” I might even say into the secret life of things not necessarily visible to the eye but which exists on an emotional spectrum made up of memory and desire. A writer of stories seeks to create what John Gardner called the “vivid and continuous dream” that is a narrative. Stories begin in all sorts of ways, from all sorts of impulses and in all sorts of places, real and imagined. The Last First Day is not autobiographical in terms of its events or even its characters, whose lives are very different from my own and my husband’s. But certainly the devotion of Peter and Ruth to each other and to the school they cherish in the novel, the sweet ache of their attachment, and the eventual parting on which they know fearfully they can depend was born out of my love for my husband, and out of the poverty and good fortune of those early years of our marriage. Most influential, though, was that distant view—beautiful, mysterious, dreamlike—from the top of the hill.

Ironically, less than two years since the novel’s hardcover publication, the college where my husband and I lived and taught for so many years announced that it would close in June of 2015, citing insurmountable financial difficulties. Just as Peter and Ruth find themselves in the novel contemplating the end of their time at the Derry School—into which they have poured their lives (and their savings)—my husband and I now find ourselves similarly cut adrift from a world we loved, and facing a new future. Sometimes life has a funny way of imitating art.