WHAT: SATIN ISLAND, a novel

WHY: “This latest strange, smart narrative experiment showcases McCarthy’s gift for wildly original fiction.
“McCarthy, author of three previous novels, including the Man Booker Prize finalist C., tightens up his offbeat style in his slimmest novel to date. The narrator, a ‘corporate anthropologist’ known only as ‘U.,’ has been granted free reign to devise a Great Report for his employer, the Company, an influential PR firm led by jet-setting, visionary executive Peynman. The subject of U.’s report is nothing less than the totality of the current era, the trends, behaviors, and cultural markers that define the times.
“As U. struggles to begin work on the document, he obsesses over seemingly disparate subjects: the suspicious circumstances of a skydiver’s death, Vanuatan cargo cults, and a recent offshore oil spill. The book’s long, numbered paragraphs mimic academic writing but give way to humorous accounts of U.’s romantic exploits, detailed tangents on the properties of petroleum, and flights of delusional grandeur, as anxiety mounts over whether his ambitious project will ever find its shape.” —Diego Báez, BOOKLIST

“Delightfully unclassifiable. This novel of ideas is begging to be read and reread for meaning with pens, diagrams, and maybe even a dossier or two thrown in for good measure.” —PUBLISHERS WEEKLY 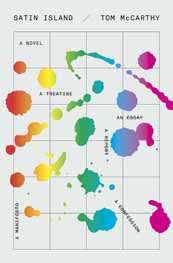 From the beginning of the book:
Turin is where the famous shroud is from, the one showing Christ’s body supine after crucifixion: hands folded over genitals, eyes closed, head crowned with thorns. The image isn’t really visible on the bare linen. It only emerged in the late nineteenth century, when some amateur photographer looked at the negative of a shot he’d taken of the thing, and saw the figure — pale and faded, but there nonetheless. Only in the negative: the negative became a positive, which means that the shroud itself was, in effect, a negative already. A few decades later, when the shroud was radiocarbon dated, it turned out to come from no later than the mid-thirteenth century; but this didn’t trouble the believers. Things like that never do. People need foundation myths, some imprint of year zero, a bolt that secures the scaffolding that in turn holds fast the entire architecture of reality, of time: memory-chambers and oblivion-cellars, walls between eras, hallways that sweep us on towards the end-days and the coming whatever-it-is. We see things shroudedly, as through a veil, an over-pixellated screen. When the shapeless plasma takes on form and resolution, like a fish approaching us through murky waters or an image looming into view from noxious liquids in a darkroom, when it begins to coalesce into a figure that’s discernible, if ciphered, we can say: This is it, stirring, looming, even it is isn’t really, if it’s all just ink blots.