Media Center: ‘You May Also Like’ by Tom Vanderbilt

WHAT: YOU MAY ALSO LIKE:
Taste in an Age of Endless Choice

WHY: “A meticulously researched and fascinating report on the erratic nature of taste.”
—Carl Hays, BOOKLIST

“Essential for readers who are interested in getting a glimpse of the decision-making process at influential online media companies, as well as those who are interested in the processes that govern individual preferences and taste making.”
—Rebecca Brody, in a starred review for LIBRARY JOURNAL 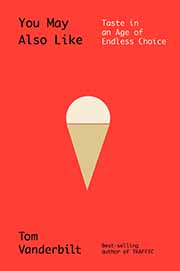 From the beginning of the book:
“What’s your favorite color?”
The question came, one morning on the walk to school, from my five-year-old daughter, lately obsessed with “favorites”—declaring hers, knowing mine.
“Blue,” I said, feeling very much the Western male (the West loves blue, and men love it a bit more than women).
A pause. “Why isn’t our car blue, then?”
“Well, I like blue, but I don’t like it as much for cars.”
She processes this. “My favorite color is red.” This marks a change. Last week it was pink. On the horizon, green seems to be entering the picture.
“Is that why you wore red pants today?” I ask.
She smiles. “Do you have any red pants?” 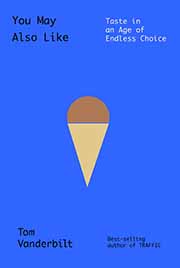 “No,” I say. When I lived in Spain, I bought and wore a pair of red pants, because I had noticed Spanish men wearing them. Once I got to New York, where hardly any men wore red pants, they stayed in the drawer. What was mainstream in Madrid was, to my eyes anyway, quite fashion forward in America circa 1991. But I do not explain any of this to her.
“You should get a pair of red pants.”
“You think so?”
Nods. “What’s your favorite number?”
This stops me. “Hmmm, I’m not sure I have a favorite number.” Then I offer, “Maybe eight.” As I say it, I try to fathom why. Perhaps because as a young child I always thought it was the most fun to write?
“Mine is six,” she says.
“Why?”
Furrows brow, shrugs. “I don’t know. I just like it.”