WHAT: GOD HELP THE CHILD, her new novel

WHY: “A chilling oracle and a lively storyteller, Morrison continues the work she began 45 years ago with The Bluest Eye.
“A little girl is born with skin so black her mother will not touch her. Desperate for approval, to just once have her mother take her hand, she tells a lie that puts an innocent schoolteacher in jail for decades. Later, the ebony-skinned girl will change her name to Bride, wear only white, become a cosmetics entrepreneur, drive a Jaguar. Her lover, a man named Booker, also bears a deep scar on his soul—his older brother was abducted, tortured and murdered by a pedophilic serial killer.
“This is a skinny, fast-moving novel filled with tragic incidents, most sketched in a few haunting sentences. When Bride’s falsely accused teacher is released from prison, there’s a new round of trouble. Booker leaves, Bride goes after him—and ends up in the woods, recovering from a car accident with hippie survivalists who have adopted a young girl abused by her prostitute mother. Meanwhile, Bride is anxiously watching her own body metamorphose into that of a child.
“As in the darkest fairy tales, there will be fire and death. There will also be lobster salad, Smartwater and Louis Vuitton; the mythic aspects of this novel are balanced by moments like the one in which Bride decides that the song that most represents her relationship with Booker is ‘I Wanna Dance with Somebody.'” —KIRKUS, a starred review

“Morrison shows us how we hold onto our pain and let it define us, pulling back on her often liquidly lyric style to offer powerful portraits in lean prose.”
—Barbara Hoffert, in a starred review for LIBRARY JOURNAL

“This haunting novel displays a profound understanding of American culture and an unwavering sense of justice and forgiveness.”
—PUBLISHERS WEEKLY, a starred review 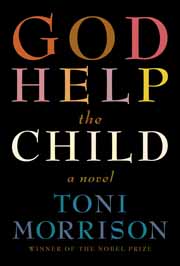 From the beginning of the book: It’s not my fault. So you can’t blame me. I didn’t do it and have no idea how it happened. It didn’t take more than an hour after they pulled her out from between my legs to realize something was wrong. Really wrong. She was so black she scared me. Midnight black, Sudanese black. I’m light-skinned, with good hair, what we call high yellow, and so is Lula Ann’s father. Ain’t nobody in my family anywhere near that color.