WHY: “A tour-de-force of travel writing and history.
“Sri Lanka, the seemingly paradisiacal island at the tip of the Indian subcontinent, has a troubling, obscured past that’s slowly revealed in this vivid travelogue.
“Gimlette takes in the colorful polyglot metropolis of Colombo, lunching with slum-dwellers and chatting with a former president. He visits ancient ruins and reservoirs as well as modern ruins from the 2004 tsunami; meets farmers who live in trees to evade marauding elephants; chats with boy prostitutes in the island’s sex tourism mecca; and strolls the old forts of European colonialists, who left behind townlets that look like Dutch watercolors.
“Gimlette’s writing is in fine form, featuring his usual gorgeous evocations of landscapes, sharp-eyed thumbnails of characters and eccentrics, and an endless font of amusing anecdotes drawn from his own picaresque adventures and from the follies of royals and imperialists. He finds the people friendly, gossipy, and cosmopolitan, but beneath that veneer lies the memory of the country’s brutal civil war between the majority Sinhalese and the Tamil minority’s Tamil Tigers terrorist group, whose suicide bombers besieged Colombo for years. The appalling violence left a historical shadow that, Gimlette observes, many Sri Lankans hide behind an evasive good cheer.
“His blend of dry wit, entertaining reportage, and perceptive insights makes for another tour de force of travel writing and history, lushly green but edged in darkness.”
—PUBLISHERS WEEKLY

“A whistle-stop tour that is breathtaking in its scope and liveliness.”
—Poornima Apte, BOOKLIST 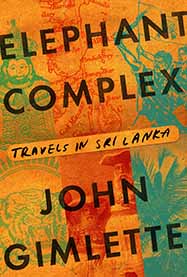 From the beginning of the book: Every city should be judged by the courage of its thieves. During my time in Colombo, I was only ever conned once, just after I arrived. I’d stopped a man in a suit, to ask the way, “I’ll show you,” he said. “That’s where I’m going.” As we walked, we talked about cricket (a mystery to me) and England (a mystery to him). “I’m Jaiya,” he said, offering his hand. A little further on, he mentioned an elephant.