WHAT: THE RED-HAIRED WOMAN, a novel

WHY: “This intriguing tale has special allure.
“Nobel laureate Pamuk’s latest, a contemporary parable about a well digger, his apprentice, and a mysterious stage actress draws upon ancient myths to peer deeply into ‘the enigma of fathers and sons,’ even as it questions the relevance of such thinking in today’s world.
“Young Cem stands atop the well shaft, hauling up buckets of silt and rocks, while Master Mahmut practices his craft below. With stern guidance and cryptic tales, Master Mahmut has become a father to the bookish young man. But the well in rural Öngören is 10 stories deep and still dry, and Cem is increasingly distracted by thoughts of a red-haired woman’s alluring smile. Tragedy strikes, the red-haired woman vanishes, Öngören is swallowed up by sprawling Istanbul, and modern drilling technology replaces the dangerous old methods. Young Cem is fascinated by Sophocles’ Oedipus Rex, but with age he is drawn to the tragedy of Rostan and Sohrab, a Persian inversion in which a father is fated to kill his son.
“Pamuk masterfully contrasts East with West, tradition with modernity, the power of fables with the inevitability of realism. Can we have our myths but be spared their consequences? As usual, Pamuk handles weighty material deftly, and the result is both puzzling and beautiful. Literary giant Pamuk is a must-read.”
–Brendan Driscoll, in a starred review for BOOKLIST

“Reality and myth intertwine
to create a twist that will send readers back to page one with hurried excitement. As much a meditation on the inescapability of fate as a classic murder master, this novel will both appease fans of Pamuk’s bibliography and delight first-time readers.”
–Joshua Finnell, in a starred review for LIBRARY JOURNAL 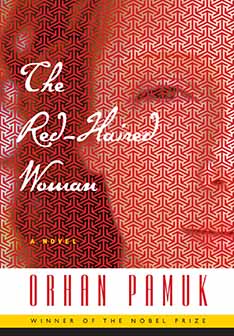