WHAT: PRINCE LESTAT: The Vampire Chronicles

WHY: “An epic tale.
Hitting the sweet spot for fans of Rice’s vampire fiction, this outing gives due attention to her series characters, bringing their stories up to the present day, with satisfying results…Fans should not miss this latest foray into Rice’s magical world built around the undead, but anyone with an interest in the supernatural and aficionados of richly detailed and lush backdrops will enjoy this.”
—Amanda Scott, in a starred review for LIBRARY JOURNAL

“Anne Rice’s return to her vampire series is big book news.
In this new entry, the vampires are imperiled by an entity they know only as the Voice, who telepathically encourages older vampires to slay their younger counterparts. Though many vampires resist the Voice’s command, several powerful elders give in. Lestat, who has been avoiding both his own kind and humans, is forced to come out of his self-imposed exile to unite the vampires to deal with this new threat…
“Featuring beloved characters from previous installments and spanning continents and centuries, Rice’s exciting return to the Vampire Chronicles is bound to please her legions of fans.” —Kristine Huntley, BOOKLIST 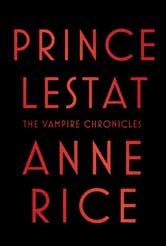 From the beginning of the book: Years ago, I heard him babbling. It was after Queen Akasha had been destroyed and the mute red-haired twin, Mekare, had become ‘Queen of the Damned.’ I’d witnessed all that–the brutal death of Akasha in the moment when we all thought we would die, too, along with her. It was after I’d switched bodies with a mortal man and come back into my own powerful vampiric body–having rejected the old dream of being human again. It was after I’d been to Heaven and Hell with a spirit called Memnoch, and come back to Earth a wounded explorer with no appetite anymore for knowledge, truth, beauty. Defeated, I’d lain for years on the floor of a chapel in New Orleans in an old convent building, oblivious to the ever-shifting crowd of immortals around me–hearing them, wanting to respond, yet somehow never managing to meet a glance, answer a question, aknowledge a kiss or a whisper of affection. And that’s when I first heard the Voice. Masculine, insistent, inside my brain.