‘Waiting for Eden’ by Elliot Ackerman

WHAT: WAITING FOR EDEN, a novel

WHY: “The heartbreaking story
of a relationship caught up in the aftermath of war.
“Eden and Mary Malcolm are happily married with a child on the way when Eden is deployed for his second tour in Iraq. After an accident leaves Eden’s best friend dead and Eden barely alive, he returns home on a stretcher covered in severe burns and is unable to return to the life he’d led before.
“Mary, meanwhile, cares for their infant daughter and must wrestle with the hard decision of whether to take Eden off of life support. She is full of resentment and guilt, unable to forgive herself for letting him leave for war. Eden’s best friend narrates — caught in limbo between this world and the next — and hovers over their lives, connecting to both in unexpected ways. He offers a bird’s-eye view of the pain and suffering of both Mary and Eden as they struggle separately to make peace with Eden’s imminent death.
“This is a deeply touching exploration of resentment, longing, and loss among those who volunteer to fight and the loved ones left behind.”
–PUBLISHERS WEEKLY, a starred review

“Gorgeously constructed.
In this unique Afghanistan and Iraq Wars novel, Ackerman’s focus on a single family makes the costs of war heartbreakingly clear, as does his drawing emotion and import from the smallest of acts with incredible skill.”
–Alexander Moran, in a starred review for BOOKLIST 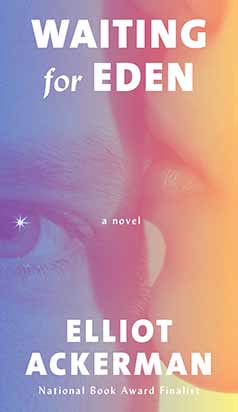