WHAT: THE DESTINY THIEF:
Essays on Writing, Writers, and Life

WHY: “After three decades and a dozen works
of fiction, Russo offers up this splendid
collection of essays.
“Some of these were previously published, and one was spoken: a charming commencement speech highlighting ‘Russo’s Rules for a Good Life.’ These are wise, personal pieces, and readers get to know the author as a comforting, funny, and welcoming guy.
“These admirable qualities are most prevalent in ‘Imagining Jenny,’ published as an afterword to Jennifer Finney Boylan’s popular 2003 memoir, She’s Not There, about her sex reassignment surgery. Jim Boylan was Russo’s close friend and a fellow college professor at Colby. At first, writes the author, ‘I missed my old pal Jim and wanted him… back again.’ But he came to understand and appreciate what his friend was going through, and he creates a tender, affectionate, ‘great love story.’
“The rest of the essays focus on writers. Russo expertly resuscitates Dickens’ Pickwick Papers for new readers as he explores ‘the spectacle of genius recognizing itself.’ He’s also insightful about Twain’s nonfiction, which offered up new opportunities for the ‘inspired, indeed unparalleled, bullshitter’ who later became the ‘compassionate, broad-minded and fatherly’ author of Huckleberry Finn. Along the way, we learn about some of Russo’s other favorite writers, including Raymond Chandler, John Steinbeck, and Flannery O’Connor, and musicians: Springsteen, Dylan, Grace Slick.
“The longest piece, ‘Getting Good,’ is a pep talk about the road the author took to become a successful writer, while the title essay argues for writers going home again in order to find the right tone for their writing. ‘The Gravestone and the Commode’ is a riff on the importance of humor in life and literature: ‘The best humor has always resided in the chamber next to the one occupied by suffering.'” –KIRKUS REVIEWS

“Russo lets his readers behind the curtain to divulge the myriad sources of his profound wisdom and boundless generosity as both writer and teacher.”
–Carol Haggas, BOOKLIST

Some time ago I had a lengthy telephone conversation with a man I’ll call David. I’d known him nearly forty years earlier at the University of Arizona, where we shared a fiction workshop taught by the writer Robert C.S. Downs, who encouraged both of us, but David especially. At the time I was finishing up my PhD in American literature, so when I asked Downs about taking a workshop, I assumed he’d put me in one at the graduate level, but he didn’t. My prose, he explained, was full of jargon and intellectual pretension. Most writers had about a thousand pages of shitty prose in them, he went on, and these have to be expelled before they can hope to write seriously. “In your case,” he added, “make it two thousand.” And so, pushing thirty, I swallowed my pride and enrolled in a workshop full of twenty-year-olds, many of whom were better writers than I was. 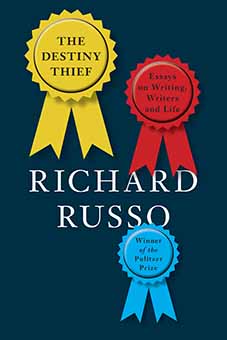