Posts Tagged ‘Year of the Runaways’

Media Center: ‘Year of the Runaways’ by Sunjeev Sahota

WHAT: THE YEAR OF THE RUNAWAYS,
a novel

WHERE: The story is set in Sheffield, England.

WHY: “Heartbreaking.
“Lyrical and incisive, Sahota’s Booker-shortlisted novel is a considerable achievement: a restrained, lucid exploration of the lives of three young Indian men, and one British-Indian woman, as their paths converge in Sheffield, England, over the course of one perilous year.
“In India, Avtar Nijjar, unfairly fired from his job as a bus conductor, is engaging in a secret relationship with Lakhpreet Sanghera, the teenage daughter of a neighboring family. When Lakhpreet’s 19-year-old brother, Randeep, is forced to abandon his education, and their government-employee father suffers a mental breakdown, Randeep is sent to England to make enough money to keep the family afloat. Lakhpreet arranges for Avtar to accompany him, although Avtar must sell a kidney and accept a predatory loan to afford a student visa, while Randeep travels on a marriage visa. His bride is the London-born Sikh Narinder Kaur, whose desire to help the desperate Randeep runs counter to her family’s pious religiosity and her impending arranged marriage. Rounding out the cast is the 19-year-old Dalit Tochi Kumar, arriving in England illegally after his entire family is massacred by radical Hindu nationalists.
“Quarrelling, parting, and finding solace in one another in unexpected ways, Sahota’s characters are wonderfully drawn, and imbued with depth and feeling. Their struggles to survive will remain vividly imprinted on the reader’s mind.” —PUBLISHERS WEEKLY, a featured boxed review

“Page-turning prose and poetic texture.
The novel’s nearly 500 pages fly by, a testament to the interwoven narratives of Sahota’s many characters.” —Diego Baez, BOOKLIST 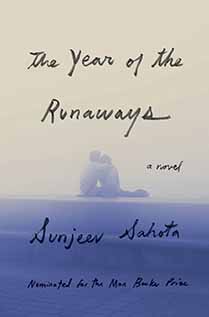