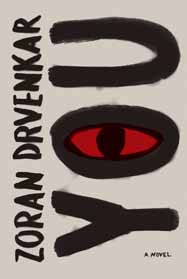 Tags: Fiction, Knopf, Thriller, You, Zoran Drvenkar
Posted in Media Center, Not on Homepage | No Comments »