In what I hope will be a recurring feature on the cooking site (barring any kitchen fires), a few co-workers and I are taking a cue from Julie Powell and taking on the Knopf Doubleday Group’s culinary giants, one recipe at a time. Inspired by a previous post on strawberry recipes, I resolved to take advantage of strawberry season by baking Edna Lewis’s strawberry shortcake recipe from The Gift of Southern Cooking. This cookbook, by the way, is fantastic—Edna’s recipes are so homemade, she even includes a recipe for making baking powder!

Rinse the strawberries, remove their caps, and slice them lengthwise before adding them to a large mixing bowl. Sprinkle 1/4 cup of the sugar and the salt over the berries, and toss gently. Taste carefully for sweetness, and add more sugar if desired. Remember that the whipped cream will be sweetened too. Sprinkle over berries the optional bourbon, and again toss gently. Cover the berries and let them sit for 10 minutes or so, until the sugar is dissolved and they have exuded some of their juices but still retail their berriness.

To serve, split the biscuits and spoon the berries over the bottom half of each. Spoon the whipped cream generously over the berries, and cover with the top halves of the biscuits. Serve immediately.

And here’s our take on it:

We began with a trip to the Union Square Greenmarket for a quart of strawberries. That’s me (Pam), your humble narrator, considering my options in the rain.

This is our new friend from Sycamore Farms. Mary is making this look like a stick-up, but we obtained the quart of strawberries through wholly legal means.

Back in Brooklyn to mix the dry ingredients (all-purpose flour, baking powder, salt, and sugar) for the biscuits. We used Edna Lewis’s recipe for warm tender cakes.

Amy handily (ho ho) mixes in the wet ingredients (unsalted butter, heavy cream). Working in the butter like this is a good skill to have, because then you can make scones.

The recipe then called for rolling out the dough to a 1/2-inch thickness. Not having a rolling pin on hand, we improvised with a can of canola spray. (Note: we are now accepting donations of rolling pins.) The dough is dark because we used whole wheat all-purpose flour—the recipe didn’t call for it, but we were feeling experimental. Note the texture of the dough: it shouldn’t be this well-kneaded. Also, I just realized from this picture that we forgot to prick the surface of the dough with a fork. Oops!

Lacking a biscuit cutter, someone had the brilliant idea of using a crème brûlée cup to stamp out rounds. We’re an innovative bunch here at Knopf Doubleday.

The biscuit rounds, right before going into the oven. Edna Lewis calls for crushed cardamom-scented sugar cubes, which would have been lovely, but we didn’t have time to let some sugar cubes sit with some cardamom pods for two weeks.

Time for the big reveal!

While the biscuits baked, we whipped up some cream. I had seen someone whip heavy cream into whipped cream before, so I had faith it could be done.

Sonia took the first stab at whipping the cream, furiously beating for 10 minutes. Then I took over the beater until my forearms hurt after another 10 minutes of vigorous beating. We all started to lose hope. “Do we need some kind of special whipping cream?” someone asked. “No,” I swore, “I’ve seen this work before. You just have to keep going, and without any warning, the cream just magically thickens!” Unconvinced, Amy stepped up to the bowl, and…

WE MADE WHIPPING CREAM!

Before putting the cakes, whipping cream, and strawberries together, we had to take a Robuchon shot: 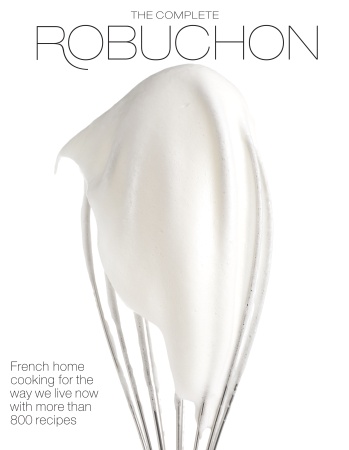 For one reason or another (over-kneading? whole wheat flour? no fork pricking?), the biscuits did not rise like they were supposed to, which would have made splitting them in half almost impossible. But when life gives you flat biscuits, you just use twice as many and call it a day—because there were only 4 of us, we used 1 biscuit for the bottom and 1 biscuit for the top.

I think you’ll agree that the shortcake looks no less delicious for the amendment.

Amy: [not speaking with her mouth full]

So, all in all, a delicious success for our band of hapless cooks. We’ll reconvene in a couple of weeks to tackle another Knopf cookbook, but until then, we have something to ask of you: what should we name our cooking column? Leave suggestions in the comments!

With beater in hand,
Pam, Amy, Sonia, Mary, and Alfred (A. Knopf)