Cooking from the Knopf Cookbooks: Snapper with Fennel, Scallions, and Red Pepper

Continuing our outpouring of enthusiasm for Judith Jones’s new cookbook, The Pleasures of Cooking for One, one of our editorial assistants, Joey McGarvey, writes about her preparation of a snapper dish.

Honesty first: I did not use snapper. Twenty dollars a pound was simply too much for this assistant, so I went with the recommended budget alternative, blackfish. (Thanks, Citarella!) And I cooked for two. But as you’ll see from the photos, which include absolutely no action shots, it was a solo effort—there was no one else to take the pictures.

The recipe calls for white wine, and the first thing I did, upon getting home, was to put it in the refrigerator; the second was to turn on the broiler and roast a red pepper. My approach is very simple—simpler even than Judith’s, which calls for olive oil—and I’ll give it below. But I’ll also mention where my recipe deviates from Judith’s.

After washing the pepper, I simply placed it on the broiler pan. 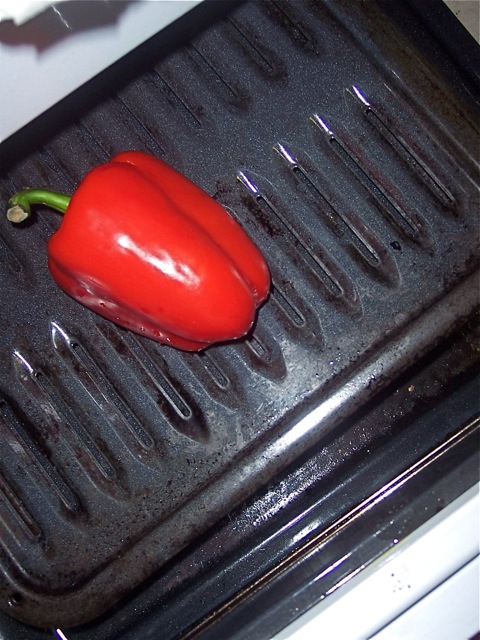 Judith suggests cutting the pepper lengthwise into several large pieces; I find that it can be easily sliced into strips after the whole thing has been roasted. She also suggests brushing each piece lightly with olive oil, on both sides, before roasting—which she does with a grill rack or the oven. But I use the broiler, and while I waited for the pepper, I snacked on a marinated artichoke heart, courtesy of the Fairway olive bar. 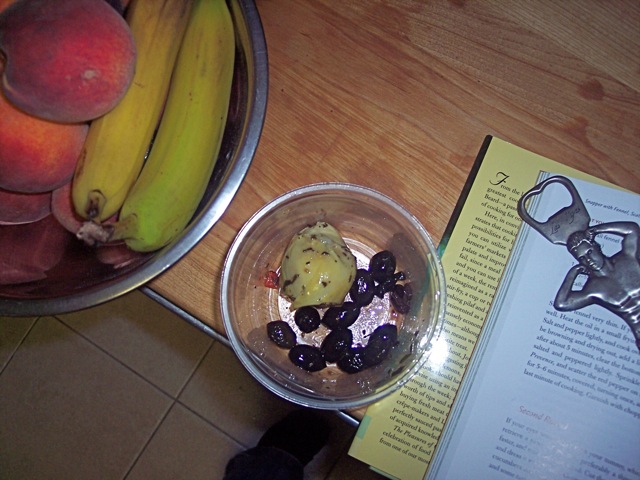 Once the pepper has blackened on one side (after approximately five minutes), turn it over and let it char on the other side. The whole process takes, I believe, about ten to fifteen minutes, although I might be overestimating. Just keep an eye on it. And take the time to enjoy the roasting pepper’s tangy, sweet, caramelized smell. 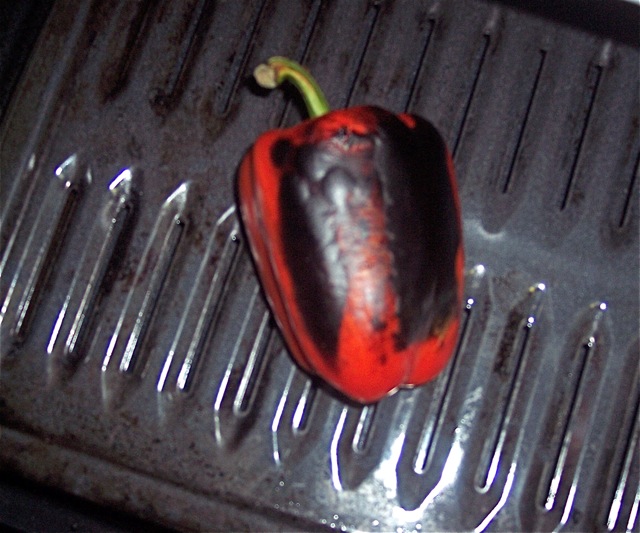 When the pepper is blackened all over, I take it off the broiler and put it in a bowl with plastic wrap over the top, letting it steam for a few minutes (ultimately making the skin easier to remove). Judith suggests using a paper bag, tightly twisted closed. 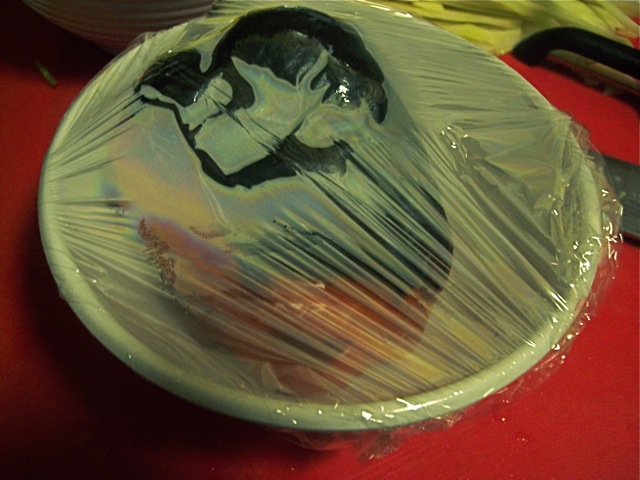 Then just peel off the skin (be careful of the hot juices, which build up when you roast the whole pepper), slice into strips, and scrape away the seeds! I almost lost this pepper as I peeled it—I was holding it above the garbage can, and it had become so tender that the flesh came away from the stem. Luckily, I grabbed it as it fell.

Now, the impetus for this recipe was the large amount of fennel we’ve received from our CSA, and slicing it thinly was the next step. I’ll note here that this fennel looked different from the fennel I’ve used before, which usually has a pronounced bulb. This fennel was more tubular, and the bulb seemed to merge with the stems. So I may have sliced more than I ought to have.

Here is the stemmed fennel:

And here is the sliced fennel, along with the extra, whole fennel that we had left, so you can see what I originally worked with. 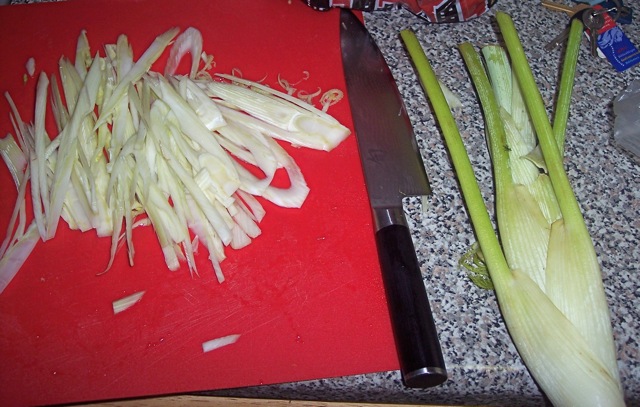 If you’re preparing the fennel well ahead of time, you might consider sprinkling it with some lemon juice—I think it might oxidize if it sits for too long.

Next, I cubed some potatoes (they were Yukon Gold, so I didn’t bother to peel them) for Judith’s suggested accompaniment: potatoes browned in duck fat. I didn’t have any duck fat, but we do keep a reserve of bacon fat in the refrigerator.

Here are the potatoes, ready to go. 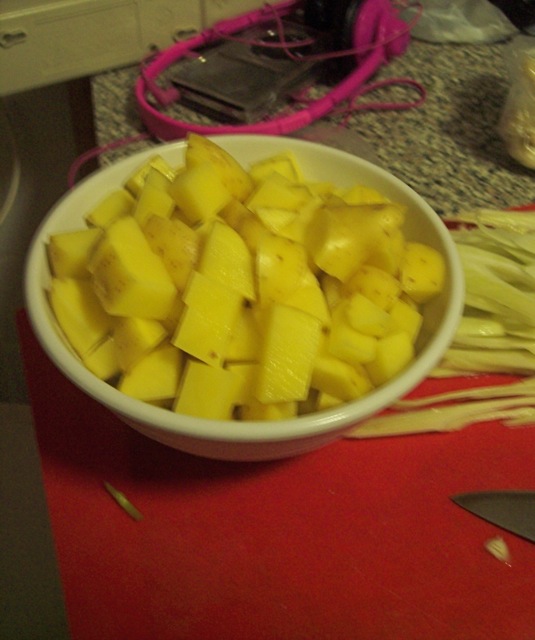 Soon after I boiled them briefly—maybe eight minutes—until cooked and tender but not too soft. You don’t want them to fall apart as they’re browned. And here are the rest of the vegetables—some chopped scallions, the strips of red pepper, the fennel. I was clearly not too concerned about the pepper seeds. 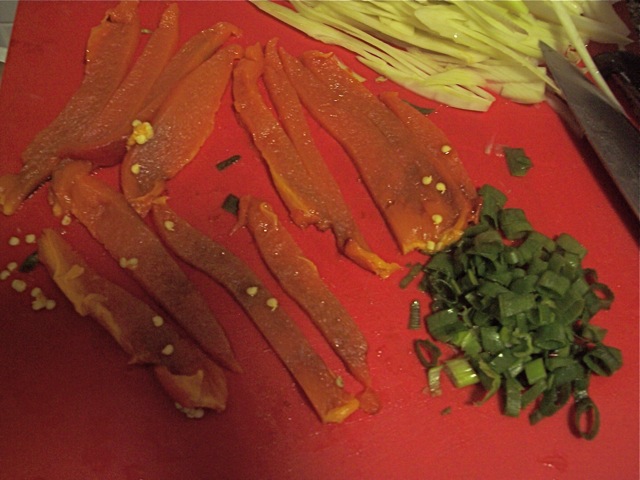 The reason I show you all this is because the fish and the potatoes cook for approximately the same amount of time—ten to fifteen minutes. I had already washed some rainbow chard as well, which was sitting in a colander. Now that the prep work was done, time to cook!

First, I cooked the fennel in olive oil with salt and pepper. I ended up adding about ¼ cup of water to it, as Judith suggests, when the fennel seemed to be drying out. 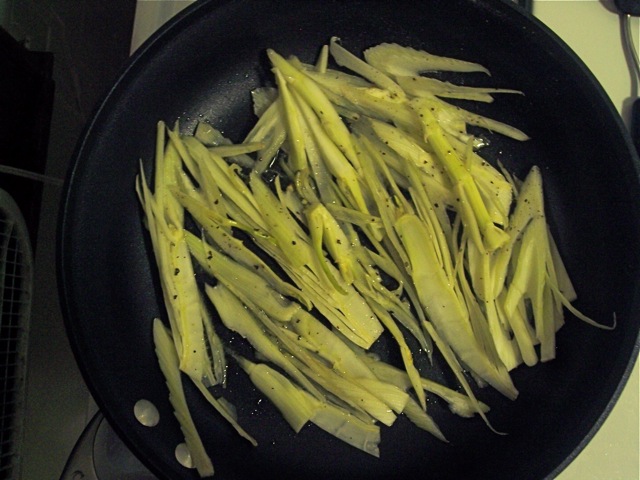 While that was happening, I heated a tablespoon of bacon fat in a pan, and added the potatoes, along with some more salt and pepper. 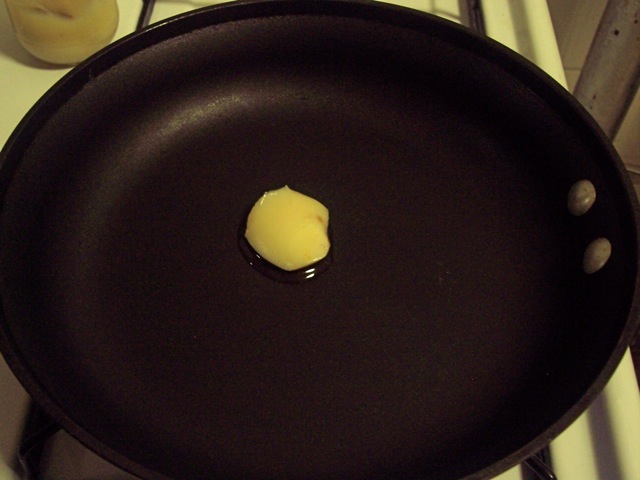 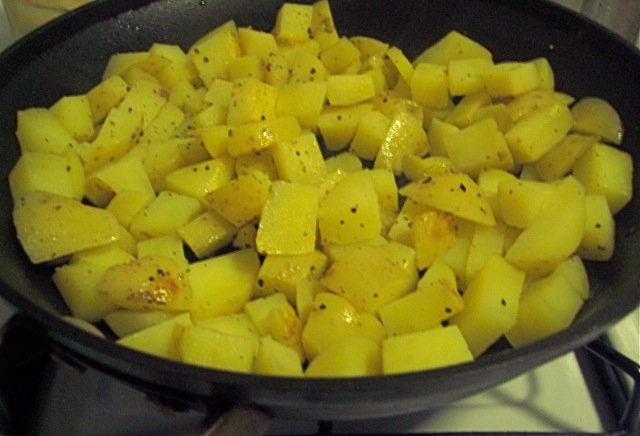 The fennel, by that time, was tender, so I added the salted and peppered fish to the pan. A word of caution: this recipe calls for a lot of fish. Judith’s recipes are intended to provide enough leftovers for multiple meals, but nevertheless—for two people, a pound of fish was twice what we really wanted. (We prevailed, however, and finished most of the meal.) I topped the fish with herbes de Provence, the scallions, and the red pepper. 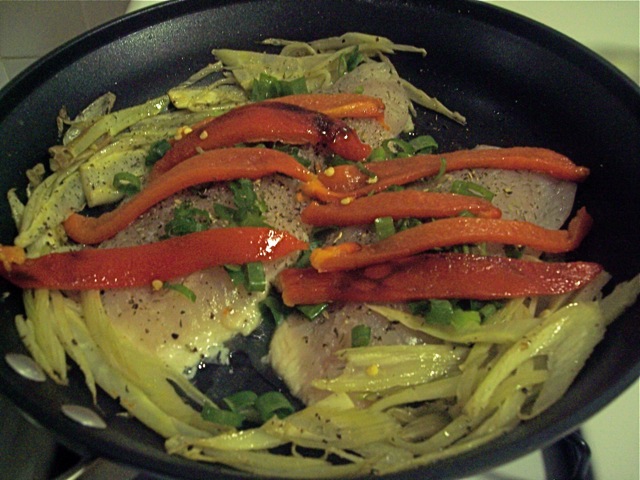 Then I added the wine (a Viognier that was recommended to me when I requested something at Columbus Circle Wines that could hold its own against fennel). Per Judith, I pitted and chopped some Mediterranean olives and added them a minute before the fish was done; and I washed and chopped finely celery and fennel leaves. The potatoes were just about done, so I added some fresh thyme: 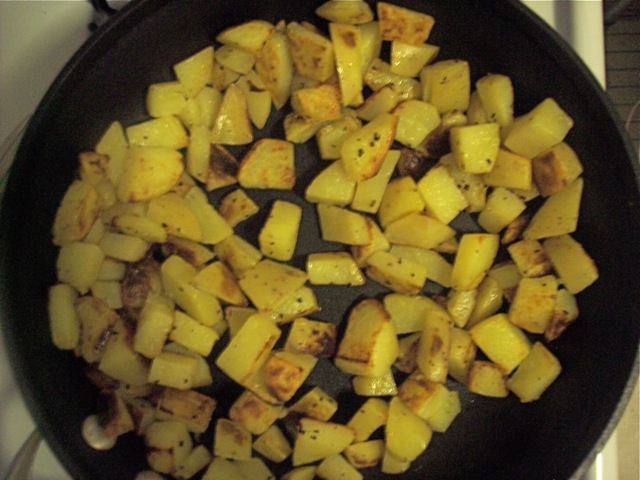 I heated olive oil and rapidly sautéed the chard, and topped the finished fish with the leaves. Here’s the final product. 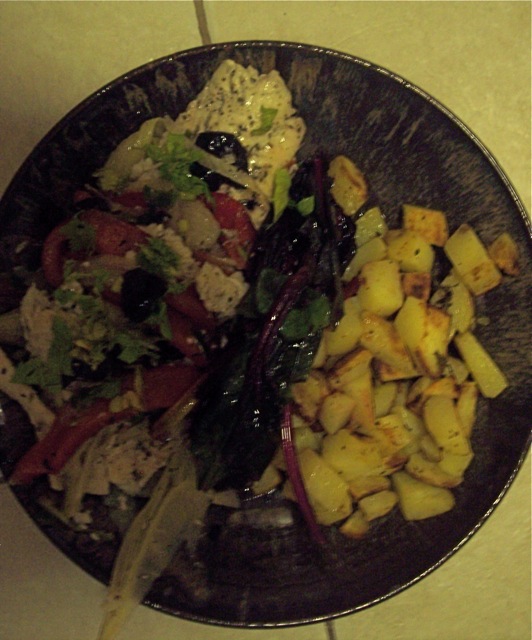 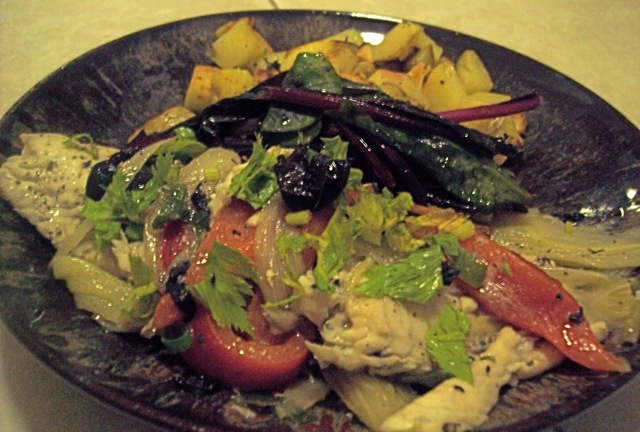 My boyfriend’s verdict: “Nom.” Here’s the empty plate afterwards (yes, we do like to eat in Washington Heights). 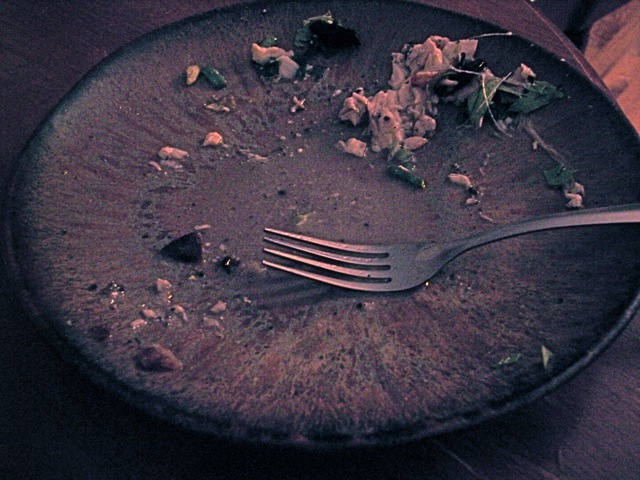 Joey and Alfred (A. Knopf)