During the months of July and August we hosted a bookseller display contest in honor of Julia Child. Over twenty booksellers entered the competition to win two round trip tickets to New York, two nights stay in a hotel, and dinner with Nora Ephron. Booksellers, we were quite impressed! Displays included a full replication of Julia’s kitchen in Cambridge, MA, a television airing classic Julia episodes, an Eiffel tower made out of two-hundred and fifty bookmarks, and a large pot with that troublesome lobster.

A committee of ten staff members from publicity, marketing, sales, and editorial reviewed all entrants and voted for their favorite display and marketing campaign. The booksellers that wowed us the most as well as encompassed the overall theme of the competition were Marion Abbott and Ann Leyhe of Mrs. Dalloway’s Literary & Garden Arts in Berkeley, CA. 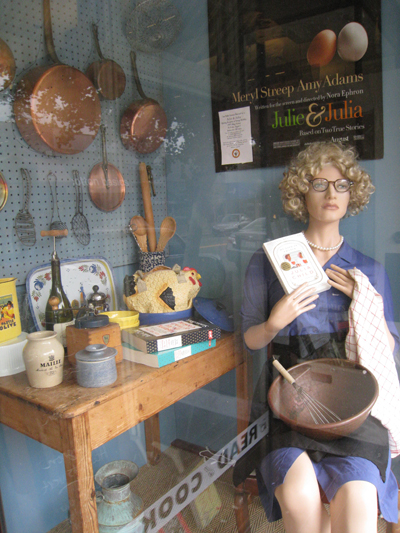 Marion and Ann turned their Mrs. Dalloway mannequin into Julia Child complete with blue shirtwaist, pearl choker, dark apron wrapped high around the waist, sensible flat shoes, and glasses. Julia presided in their front window, which is now a kitchen: on the Wedgwood blue pegboard wall hung Parisian copper pots and lids (purchased at the Paris flea market in 1949), a baguette basket and wire utensils. The wooden table featured a Picard pitcher, bistro glasses and an array of French paraphernalia. In addition, a chalkboard listed the Menu du Jour and around the periphery of the window several copies of My Life in France and Julie & Julia were displayed.

Coordinating with these efforts, Marion and Ann co-hosted a reception with a local wine store on on August, 7th–the date of the movie release. In addition, the local moving theater provided posters for their event which were displayed at both Mrs. Dalloway’s and the vintage wine store across the street. An e-blast went out to their 3000 + list serv and postcards were stationed at the checkout as well as copies of the two featured books. A food table display was also featured at the entrance of the store with copies of Mastering the Art of French Cooking, My Life in France, and Julie and Julia.

Thanks to all who participated and Bon Appétit!