Thanksgiving with the Borzoi Cooks

Unwilling to brave a 7-hour flight to my family’s home in California for Thanksgiving, I decided to host Thanksgiving dinner for myself and similarly stranded friends. We’d do the whole traditional shtick, I thought—a beautiful, dry-brined turkey, chestnut stuffing, buttermilk mashed potatoes, brussels sprouts, pumpkin pie, and, of course, gravy.

A quick sidenote: Check out this fascinating infographic from The New York Times that maps out where searches for different Thanksgiving recipes come from. Apparently, I’m one of many in the North who had a hankering for a salty turkey.

An unplanned guest, however, conspired to change my plans. My good friend (and co-chef), Andrea, asked if she could bring someone along. “Of course! The more the merrier!” I replied. “One thing, though,” Andrea added. “She doesn’t eat birds. She eats meat—but not birds.” Is there a name for people who don’t eat birds, I wonder? A non-avianarian? Anyone know? Seriously. I’ve been googling it for ages, and would like to find out.

In honor of the non-avianarian, we added ham to the menu. With country-steak ham on my mind, thanks to lingering memories of a truly amazing meal at The Dillard House in northern Georgia, I turned to Edna Lewis and Scott Peacock’s The Gift of Southern Cooking. Why not inflect a northern Thanksgiving with some down-home goodness? Our NYC-based guests, after all, have roots in the South—my boyfriend grew up in Atlanta, and both Andrea and her boyfriend graduated from Emory.

We settled on the recipe for Madeira-baked ham. For kicks, we decided to make fresh angel biscuits, too. (I’ll admit that the prospect of leftover ham-on-a-biscuit sandwiches the next morning was a key factor.)

We purchased a butt portion of ham—probably less than 10 pounds, the smallest we could find (don’t forget we had a whole turkey, too). Edna and Scott say to use an authentic Southern ham—preferably a smoked Smithfield ham—but this smoked Cook’s brand ham was all we could find at our local Harlem Fairway: 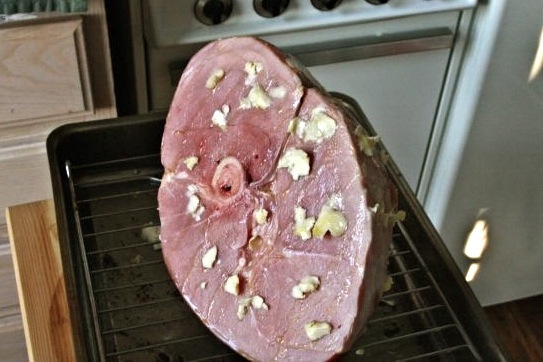 First, we smeared the ham with butter, and sprinkled some ground nutmeg on top (freshly grated would be even better).

Then, we poured about 1/3 of the bottle of Madeira wine into the bottom of the pan, placing the buttered ham on the rack.

The ham went into the oven at 350 degrees.

We basted the ham with the Madeira from the bottom of the pan every 15 minutes, and let it roast for about 1 and a half hours. The sugar from the wine resulted in a browned, caramelized exterior, and the ham itself was juicy. We served it in the pan juices and drippings for a very simple sauce—so tasty. 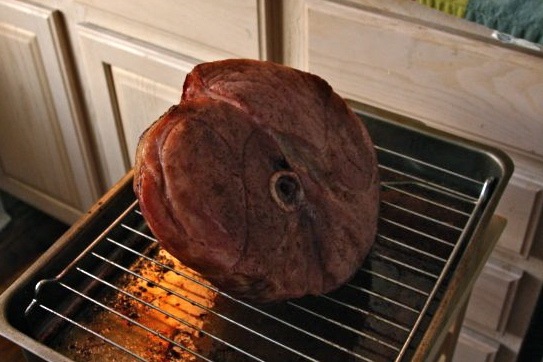 For the biscuits, we began by proofing some yeast, dissolving 1 packet in warm water, and letting the mixture stand for 5 minutes. We then stirred in the room-temperature buttermilk, and mixed the dry ingredients—flour, sugar, baking powder, baking soda, and salt—in a separate large bowl. We worked in the chilled lard (and some reserved bacon fat saved for just this occasion) into the dry ingredients until the pieces of lard and bacon fat were about the size of peas. Then, we stirred in the proofed yeast and buttermilk until the mixture was just blended. 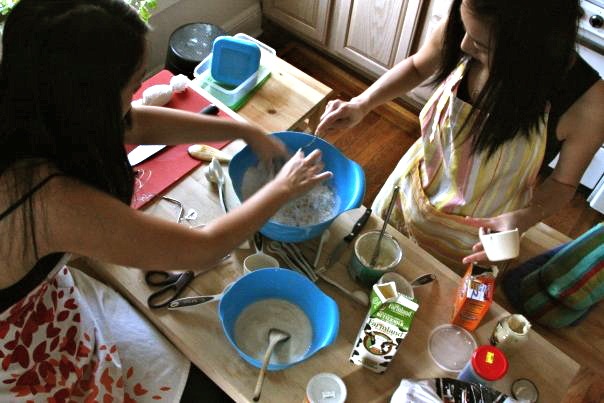 The dough was given a light knead (about six or seven times), and rolled out to a thickness of half an inch. Andrea and I then stamped out the biscuits with the tops of beer glasses (when you have glasses, I think, you don’t really need a pastry cutter—NYC apartments have only so much space!). A tip: re-roll out any leftover dough, and continue to cut out biscuits so you don’t waste any of that delicious dough.

The cut dough was placed on buttered (or greased) baking pans, then covered loosely with plastic wrap and left alone to rise for 45 minutes. 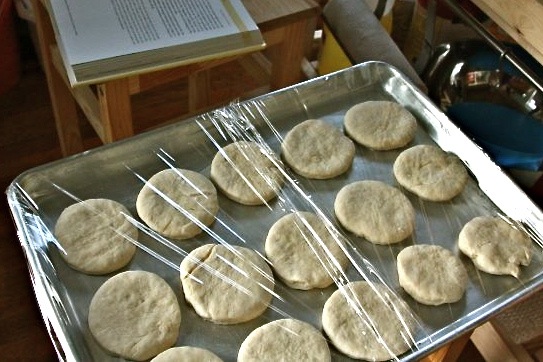 Here they are, beautiful and browned. 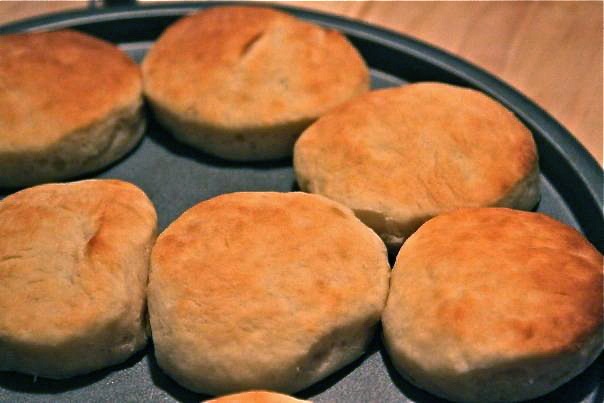 Edna and Scott say to top the biscuits with melted butter, but we served them alongside homemade scallion butter and honey butter, for a choice between the sweet and savory. Angel biscuits are different from your classic biscuits in that, with the proofed yeast and two leavenings, they are lighter and fluffier. I definitely appreciated their texture at Thanksgiving, with all that heavy meat already in my stomach. Another great thing about this recipe is that the dough can be saved and refrigerated for 3-5 days, which means you can make it ahead of time or save some dough for whenever you want fresh biscuits during the work week.

A photo of the whole spread: 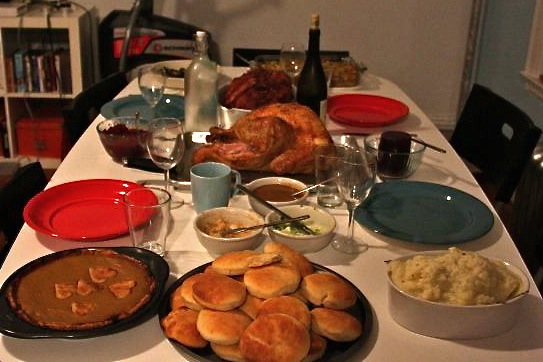 A close-up, with the biscuits, scallion butter, and honey butter front and center: 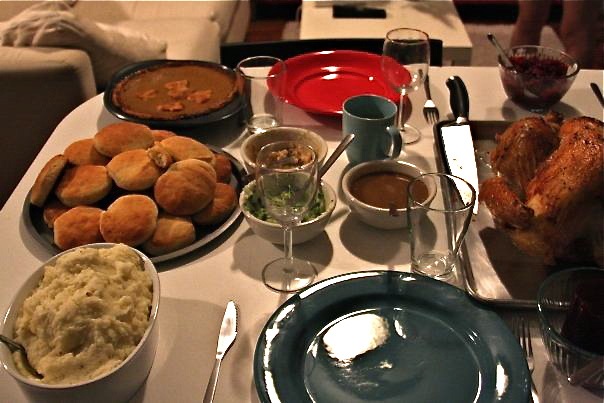 Our turkey, trussed and roasted: 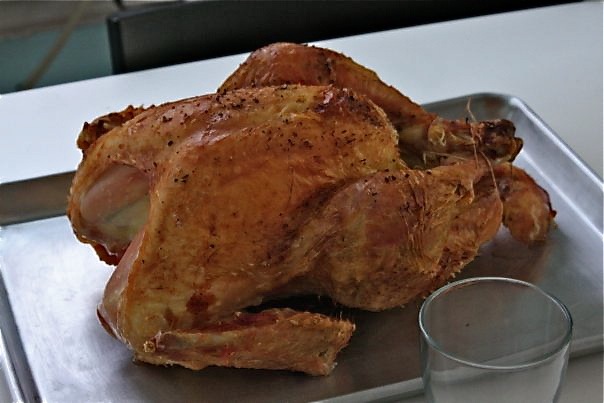 A picture of my plate: turkey leg, mashed potatoes, ham, brussels sprouts, and stuffing. Apparently the average Thanksgiving meal is over 3,000 calories. I believe it: 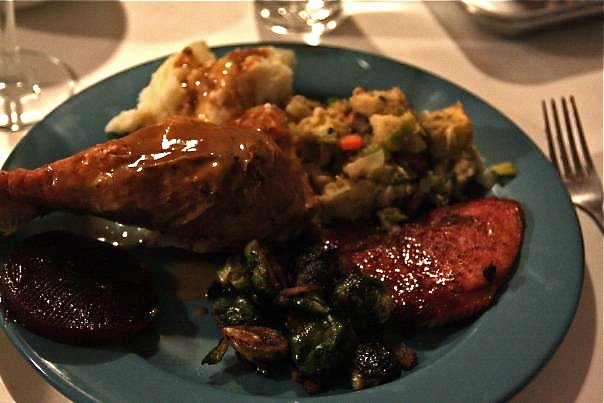 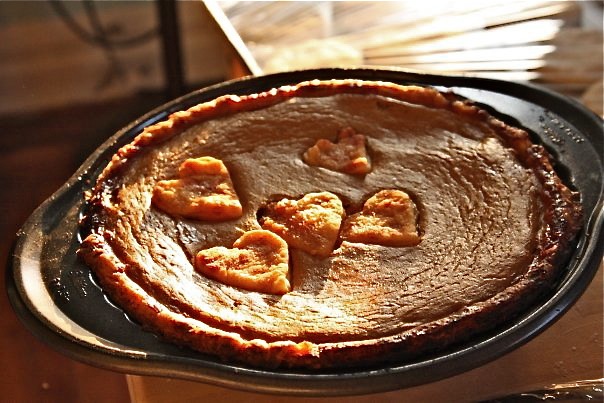 Lastly, my kitten, looking slightly guilty after getting a taste of the pumpkin pie: 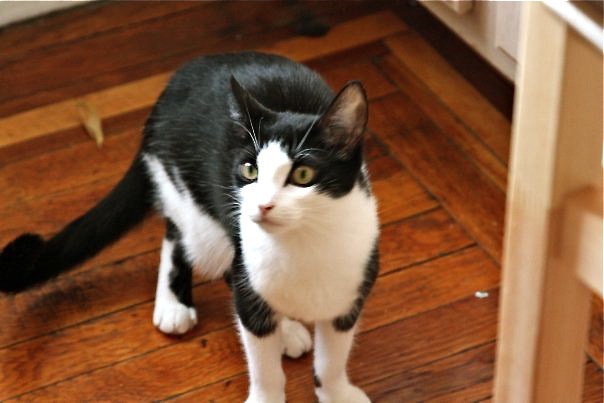 The punch line to all this is that the mysterious non-bird-eating guest didn’t show up—she wasn’t able to make it. But I’m grateful to her (and to Edna and Scott) for inspiring this Southern-inflected Thanksgiving—and happily, there were more leftovers for us!