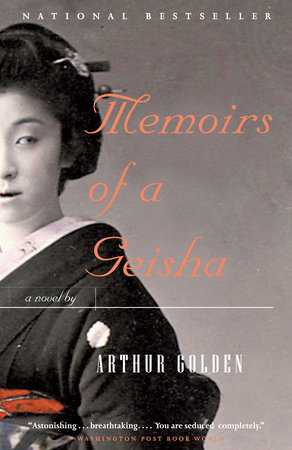 About this guide
The questions, discussion topics, suggested reading list, and author bio that follow are intended to enhance your group’s experience of reading Arthur Golden’s Memoirs of a Geisha. We hope that they will give you a number of interesting ideas and angles from which to approach this enthralling debut novel, which is the fictional true confessions of one of Japan’s most celebrated geisha.

The strikingly pretty child of an impoverished fishing family, Chiyo is taken to faraway Kyoto and sold into slavery to a renowned geisha house where she is renamed Sayuri. Initially reluctant, Sayuri must finally invent and cultivate an image of herself as a desirable geisha in order to survive in Gion’s cruel hierarchy. Through her eyes, we are given a backstage view of the ancient and secretive geisha district, Gion, and of the lives of the women who learn and practice the rigorous arts of the geisha. Behind its facade of haunting beauty the district turns out to be a viciously competitive place where women vie desperately for men’s favor and largess, where a young girl’s virginity is auctioned off to the highest bidder, where personal trust is almost nonexistent, and where no woman can afford even to dream about love or happiness. A timeless pocket of the world, Gion cannot remain cut off from the bustle of the modern era forever. When Japan enters the Second World War, Gion’s isolation is finally breached and Sayuri must once again reinvent herself and her way of existence. Memoirs of a Geisha is a treasure of a book, an unparalleled look at a strange and mysterious world which has now almost vanished. It is also, and unforgettably, a dazzling portrait of a singular and most seductive woman who tells her story in a compelling first person voice.

2. “The afternoon when I met Mr. Tanaka Ichiro,” says Sayuri, “really was the best and the worst of my life” [p. 7]. Is Mr. Tanaka purely motivated by the money he will make from selling Chiyo to Mrs. Nitta, or is he also thinking of Chiyo’s future? Is he, as he implies in his letter, her friend?

3. In his letter to Chiyo, Mr. Tanaka says “The training of a geisha is an arduous path. However, this humble person is filled with admiration for those who are able to recast their suffering and become great artists” [p. 103]. The word “geisha” in fact derives from the Japanese word for art. In what does the geisha’s art consist? How many different types of art does she practice?

4. Does Sayuri have a better life as a geisha than one assumes she would have had in her village? How does one define a “better” life? Pumpkin, when offered the opportunity to run away, declines [p. 53]; she feels she will be safer in Gion. Is her decision wise?

5. How does Sayuri’s status at the Nitta okiya resemble, or differ from, that of a slave? Is she in fact a slave?

7. “We must use whatever methods we can to understand the movement of the universe around us and time our actions so that we are not fighting the currents, but moving with them” [p. 127]. How does this attitude differ from the Western notion of seizing control of one’s destiny? Which is the more valid? What are Sayuri’s feelings and beliefs about “free will”?

8. Do you see Sayuri as victimized by Nobu’s attentions, or do you feel pity for Nobu in his hopeless passion for Sayuri? Do you feel that, in finally showing her physical scorn for Nobu, Sayuri betrayed a friend, or that real friendship is impossible between a man and a woman of their respective stations?

9. How do Japanese ideas about eroticism and sexuality differ from Western ones? Does the Japanese ideal of femininity differ from ours? Which parts of the female body are fetishized in Japan, which in the West? The geisha’s ritual of preparing herself for the teahouse is a very elaborate affair; how essentially does it differ from a Western women’s preparation for a date?

10. Does the way in which the Kyoto men view geisha differ from the way they might view other women, women whom they might marry? What are the differences? How, in turn, do geisha view men? Is the geisha’s view of men significantly different from that of ordinary women?

11. Do you find that the relationship between a geisha and her danna is very different from that between a Western man and his mistress? What has led Sayuri to think that “a geisha who expects understanding from her danna is like a mouse expecting sympathy from a snake” [p. 394]?

13. Pumpkin believes that Sayuri betrayed her when she, rather than Pumpkin, was adopted by the Nitta okiya. Do you believe that Sayuri was entirely blameless in this incident? Might she have helped to make Pumpkin’s life easier while they were in the okiya together? Or has Pumpkin’s character simply been corrupted by her years with Hatsumomo and the entire cruel system that has exploited her?

15. During Sayuri’s life, Japan goes through a series of traumas and unprecedented cultural change: the Great Depression, the War, the American Occupation. How do the inhabitants of Gion view political events in the outside world? How much effect do such events have upon their lives? How aware are they of mainstream Japanese culture and life?

18. Why might Golden have chosen to begin his narrative with a “Translator’s Note”? What does this device accomplish for him?

About Arthur Golden
Read an author bio and view a complete list of titles by Arthur Golden available from Random House here.