A Conversation with Jayne Anne Phillips 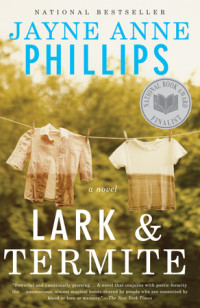 Just out in paperback, Jayne Anne Phillips’s latest novel, Lark & Termite, is a powerful work that courageously delves into the hidden territory of family secrets. This National Book Award finalist is a wonderful choice for book club discussion, and to supplement your reading experience we’re pleased to share the following conversation with the author, in which she talks about her inspiration for the book and its unique subject and point of view.

Read on for the author interview, and keep clicking:
• About Lark & Termite
• Print a reading group guide
• Read an excerpt
• Catch Jayne Anne Phillips on tour for Lark & Termite

Q: Was there a particular event or idea that gave birth to this novel?

A: I was in my hometown perhaps thirty years ago, visiting a high school friend. She was living in a second floor apartment over a detached garage behind a house and her window looked out onto a lush grass alley with white gravel tire tracks. One-story, tin-roofed houses faced the alley. From her window, I saw a boy sitting in a 1950’s aluminum lawn chair facing the alley, his legs folded up under him as though he couldn’t feel them. He was holding a narrow strip of blue dry cleaner bag up to his forehead, continually blowing on it so that it moved in front of his eyes. He seemed to be watching the blue or looking through it. I asked my friend, “Who is that? What is he doing?” “I don’t know,” she said, “but he sits that way for hours.” The image burned itself into my consciousness.

Years later, on my birthday, a talented artist named Mary Sherman gave me a drawing I admired in her sketchbook. She’d written some words around the edge that were almost illegible, Termite, something, something, something. She ripped out the page and gave it to me. The drawing became the image of Termite, because my actual memory of the real boy was almost a spiritual impression. I wasn’t aware at the time of the merging of the real image and the created image. Mary’s drawing, strangely, suggests a boy in profile, holding something we don’t quite see. And strangely too, or fittingly, his face and expression resemble what I imagine as the older face of a child I knew in the early 70’s, the child of a friend, born with severe problems, a baby who was nearly silent, whose aspect and unfocused gaze were open and beautiful, who smiled at his mother’s voice, and at motion, when he was lifted and swung. In Lark and Termite, Mary’s long ago gift to me becomes Lark’s drawing of Termite, and my sense of Termite is informed by children I’ve known whose perceptions, altered by disability, seemed very intense.

My books come together slowly, in elemental ways, long before I begin writing them and one book opens into the next.

Q: LARK AND TERMITE begins in July, 1950, on the day of Termite’s birth and his father’s death during the Korean War. These two characters never meet and yet their intuitive sense of each other is so beautifully captured. It seems you are exploring the idea of the ever mysterious and powerful ways families are linked together across time and generations. Is that an accurate assessment?

A: Generational bonds are mysterious and powerful; love does imply a spiritual dimension. I believe that love, in its strongest, most primal forms can endure beyond death – in memory, in forms of perception, and that story or literature can redeem what is otherwise lost, unknown, forgotten. In Lark and Termite, relationships of great yearning and power are interrupted by war, by a catastrophic event no one can escape. The story told again and again, in all cultures and religions, tells us that we can find our way home within a spiritual dimension we cannot fully imagine. Leavitt begins to intuit that dimension, those enlarged perceptions, through the Korean children with whom he is trapped; they become his family. The reader begins to enter Termite’s perceptions, his sense of adjacent dimensions, his apprehension of time and space not obvious to others.