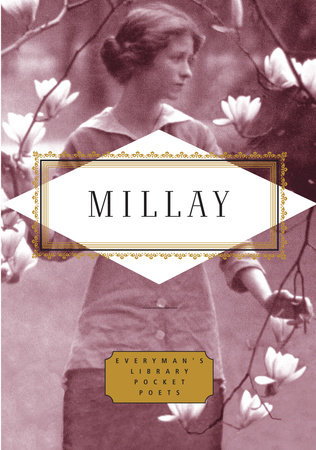 A poem of the season by Edna St. Vincent Millay (1892-1950), whose candle, as she famously wrote in the poem “First Fig,” burned at both ends; her brio is undeniable nearly a century after she won America’s heart as a very young poet. Millay has just been added to the Everyman’s Library Pocket Poets series, in a collection that also contains her one-act antiwar fable, Aria da Capo.

To what purpose, April, do you return again?
Beauty is not enough.
You can no longer quiet me with the redness
Of little leaves opening stickily.
I know what I know.
The sun is hot on my neck as I observe
The spikes of the crocus.
The smell of the earth is good.
It is apparent that there is no death
But what does that signify?
Not only under the ground are the brains of men
Eaten by maggots.
Life in itself
Is nothing,
An empty cup, a flight of uncarpeted stairs.
It is not enough that yearly, down this hill,
April
Comes like an idiot, babbling and strewing flowers.