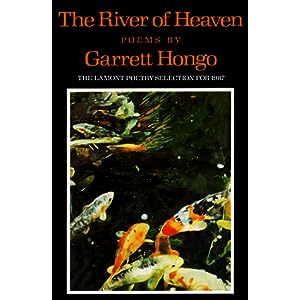 Garrett Hongo, a fourth-generation Japanese American, was born in Hawaii and raised in Los Angeles from the age of six. But for a period of time in his thirties and early forties he moved back to Volcano, the small town where he was born, and lived in the shadow of Kilauea. The experience gave rise to his memoir, Volcano, as well as to a number of poems, like this one from his 1987 book, The River of Heaven.

Mists in the lantern ferns,
green wings furled against the cold,
and a mountain wind
starts its low moan through ohia trees.
The lava land blazes in primrose and thimbleberry,
scented fires of pink and blue
racing through jungled underbrush.
I’m out feeding chickens,
slopping a garbage of melon seeds and rind
over the broken stones and woodrot of the forest path.
I’m humming a blues,
some old song about China Nights
and boarding a junk,
taking me from my village.
Miles in the distance,
Kilauea steams and vents
through its sulphurous roads,
and a yellow light spills through
a faultline in the clouds,
glazing the slick beaks of the feeding chickens,
shining in their eyes
like the phosphorous glow
from a cave tunneled miles through the earth.
What was my face before I was born?
the white mask and black teeth
at the bottom of the pond? What is the mind’s insensible,
the gateless gate?
Through overgrowth and the leaning drizzle,
through the pile and dump of tree fern
and the indigoed snare of lasiandra
shedding its collars of sadness by the broken fence,
I make my way down a narrow path
to the absolute and the house of my last days,
a dazzle of light scripting in the leaves and on the weeds,
tremors in the shivering trees.