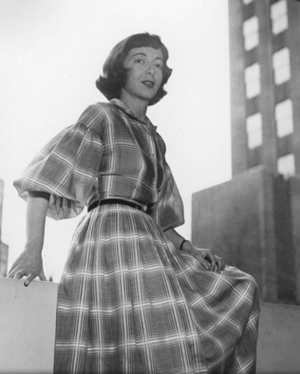 As the head of advertising, first at Simon and Schuster, where she worked for 29 years, and then during her 42 years at Knopf, Nina crafted the best, the smartest, the most effective, and the most imitated book ads in the industry. She was beloved and admired not only at Knopf but throughout the industry, and she continued coming into the office up until last fall. She would have been 94 years old this June 16, Bloomsday. She was also a poet who published light verse during the nineteen-forties and fifties in The New Yorker, The Atlantic, and Canada’s Maclean’s magazine. Below are two of Nina’s poems, originally featured in The New Yorker.

A memorial service for Nina will be held in Manhattan on Wednesday, May 19th at 4:00 pm at the New York Society for Ethical Culture, 2 West 64th Street.

WHERE THE SINGLE MEN GO IN SUMMER

There is an island in a far-off sea,
Well hid, for to divulge its latitude were
treason,
Whereto in swallow-flocks, and silently,
The single men migrate in the summer
season.

The millions of single men, having fled
all year,
Arrive at this island utterly exhausted,
Murmur a brief thanksgiving upon the
pier,
Then breakfast on peanut butter and a
chocolate frosted.
They tell male stories in the idioms of
all nations,
Listen to ball games on the radio,
Hear minstrels celebrate the consum-
mations
Of remarkable business deals. They
never go
Away from this sanctuary till the
season’s sped.

In summer hotels all over the world,
the sad single girls wait in vain
For the One—personable, solvent,
unwed—
Who might, but never does, arrive on
the next train.

OH, WHAT A BEAUTIFUL MORNING!
(DAILY EXCEPT SAT. AND SUN.)

Unruly sun,
Why do you shine invariably from Mon.
Through Fri.?
Oh, why do your celestial rays
Choose these unholy days to bring me intimations
Of Merrick, Montauk, and the intermediate stations?
Old fool, where are you when my work is done,
On Sat. and Sun.?
Daily,
While the gentlefolk recline
On the Beach of Bailey,
You shine.
But Sundays, when I would lie prone, and bask with my fellow-drones,
On the Beach of Jones,
Why, then the heavens are dun.
Haven’t you heard? This is the day of the Common Man.
Would you deny us all our Common Tan,
Sun?
All week you smile upon Southampton sand.
All week we toil, and when our work is through
The voice of Weather 6-1212
Proclaims increasing clouds throughout the land.