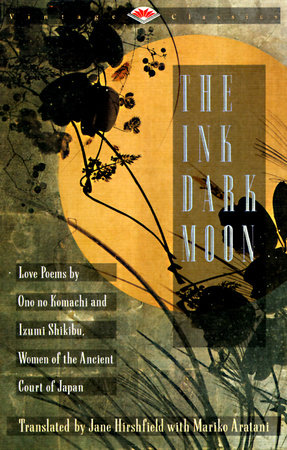 Izumi Shikibu, born around the year 974, lived and wrote during the golden period of Japan’s Heian court. She was “committed to a life of both religious consciousness and erotic intensity,” the poet Jane Hirshfield and her translation partner Mariko Aratani tell us in the introduction to The Ink Dark Moon, their translations of ancient court love poetry. Though men of the time could take multiple wives and lovers and a woman could be wife to only one man, Heian women were able to own property and receive income, giving them the ability to choose their romantic fates with some independence and enjoy multiple affairs of the heart. Divorce was also possible, and was the outcome of Shikibu’s marriage to a provincial official when, while in service to a former empress at the court, she had a passionate affair with the empress’s stepson. Poems played a key role in such affairs (“the first intimation of a new romance for a woman of the court was the arrival at her door of a messenger bearing a five-line poem in an unfamiliar hand”), and in this climate, Shikibu wrote the verse that guaranteed her place as Japan’s major woman poet. Her famous Diary tells of her significant love affair with Prince Atsumichi. Their five-year relationship, which ended when he died, began with his gift of a spray of orange blossoms.

Nothing
in the world
is usual today.
This is
the first morning.

Come quickly—as soon as
these blossoms open,
they fall.
This world exists
as a sheen of dew on flowers.

Even though
these pine trees
keep their original color,
everything green
is different in spring.

Seeing you is the thread
that ties me to this life—
If that knot
were cut this moment,
I’d have no regret.

Sleeplessly
I watch over
the spring night—
but no amount of guarding
is enough to make it stay.