When I began reading Martin Walker’s latest mystery, The Dark Vineyard, I experienced a cool, scrambling sensation in my stomach: not a nervous knot over who the murderer might be, but rather the same sensation I felt while reading Julia Child’s memoir, My Life in France. Whenever the hero of the story, Bruno, sat down for a meal, the delectable cuisine of the Périgord region made this reader’s stomach cry for attention. For Bruno, Saint-Denis’ chief of police, eating a high-quality meal is every bit as crucial as solving murder mysteries. In rereading Walker’s first mystery, Bruno, Chief of Police, one especially palate-pleasing meal seemed to jump off the pages. Isabelle, Bruno’s soon-to-be-lover, prepares a meal to win Bruno’s affection. When she pays Bruno an unexpected visit one night after work, she’s equipped with all of his favorite ingredients: beefsteaks, pâté, baguette, cheese, and red wine. Between those items and Bruno’s contribution of skillet potatoes and homegrown lettuce for a salad, an impromptu (and infatuating) meal is made.

Although Walker gives us a quick glimpse of Bruno marinating the meat, we can’t expect to get a thorough recipe in the midst of a mystery novel. I was still determined to make the meal at home; and as a native New Yorker, who better for me to consult with about French cooking than Julia Child, the master herself? With that, I cracked open Volume I of Mastering the Art of French Cooking and pieced together a Child menu that perfectly parallels Bruno’s appetite. While there are lots of little steps for Julia’s recipes, this meal will come together in just under a half an hour, making it perfect for when you’re exhausted but still fancy a bistro-quality meal.

If you’re anything like me, you’ll probably want to get the dull part over with first, which is why I began by arranging my fresh green salad with Julia’s Sauce Vinaigrette. Bruno tends to grows his vegetables at home, but since some of us Borzoi cooks aren’t fortunate enough to have lush gardens growing outside of our teeny-tiny apartments, I’ve settled for the produce section. Bruno and Isabelle eat a salad made purely of lettuce, but I colored things up with fresh, in-season tomatoes. The vinaigrette calls for a whisked mixture of olive oil, red wine vinegar, lemon juice, mustard, salt, parsley, and tarragon (herbs are optional, but I can’t get enough of them). I kept the dressing on the side until it was time to dine, thereby avoiding a soggy salad.

Then I started on the meat, a bit of Bifteck Sauté Marchand de Vins (Pan-broiled Steak with Red Wine Sauce). Child’s recipe is pretty similar to Bruno’s method in the book, but Bruno cooks on a small outdoor grill, whereas I’m following Julia by cooking in a sauté pan. Bruno uses mustard in the marinade instead of butter, so I swapped in Julia’s recipe for Beurre de Moutarde (Mustard Butter), so we can easily merge the two cooks’ ideas. The mustard butter is easy–just whip butter with strong Dijon mustard–and make the red-wine sauce later. What, after all, would any Child recipe be without stick after stick of butter? 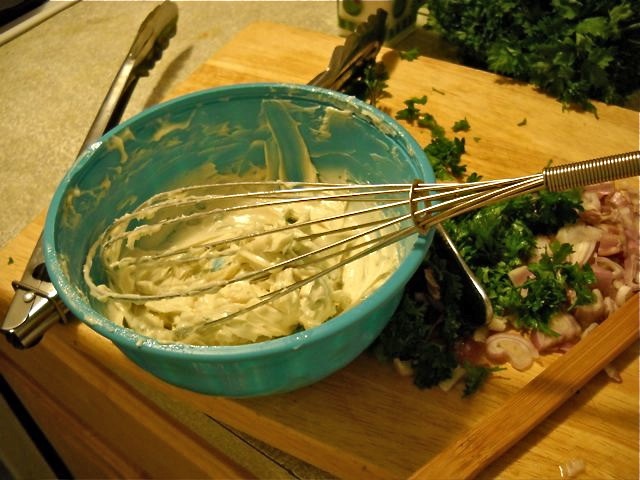 Julia says your best bet is to buy any tender, well-aged ¾-inch steak that will easily fit into your skillet. Trim off excess fat, and cut small incisions around the circumference of the steak wherever you see gristle (between the fat and the meat), as it’ll keep the steaks from curling. Make sure you pat your steaks thoroughly dry, or else they’ll won’t brown. 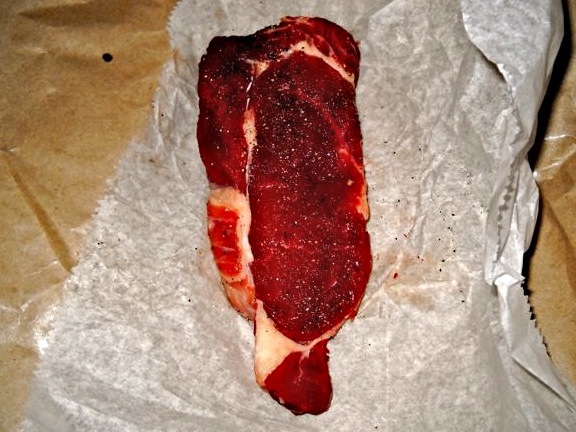 For a side dish, I decided on Julia’s Pommes de Terre Sautées (Potatoes Sautéed in Butter, my personal favorite.) Isabelle whips these up pretty quickly for Bruno, but Julia shows us how much effort and precision go into making perfect skillet potatoes. Start with small boiling potatoes, since they take the longest to cook (Bruno boils first and then fries; Julia sautées them raw). Peel the spuds and cut them into elongated olive shapes, so they’ll roll easily in the pan. (Julia urges us not to wash the potatoes, since they need to be completely dry before cooking.) Heat oil and butter until foam subsides, then add your potatoes. 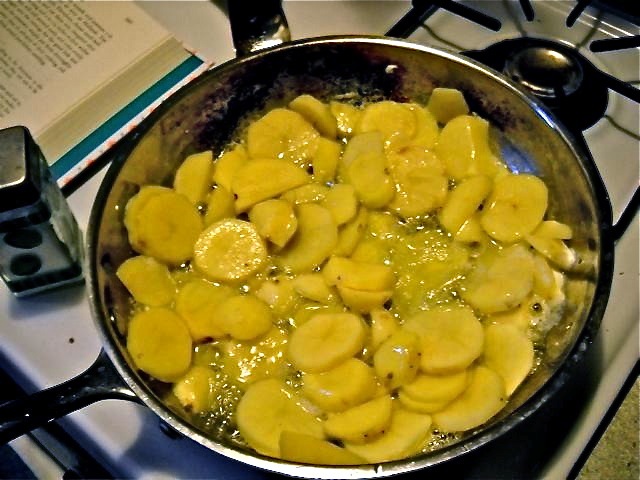 Julia recommends that we “[regulate] the heat so butter is always very hot but not coloring.” To prevent that from happening, shake the skillet back and forth to roll the potatoes and sear them on each side for about 2 minutes. Keep it up for another 5 minutes until the potatoes are pale gold, which tells you that a seared, protective film has formed over them, so they will not stick to the pan. (I have an unfortunate track record of bitter, charred potatoes, but this time around I found it best to keep them moving. Don’t be afraid to pick up the pan and shake them: it’s infinitely fun and, provided you don’t splash hot oil onto yourself, perfectly safe.) Sprinkle the potatoes with salt, roll them again, then lower the heat and let them cook, covered, for about 15 minutes. 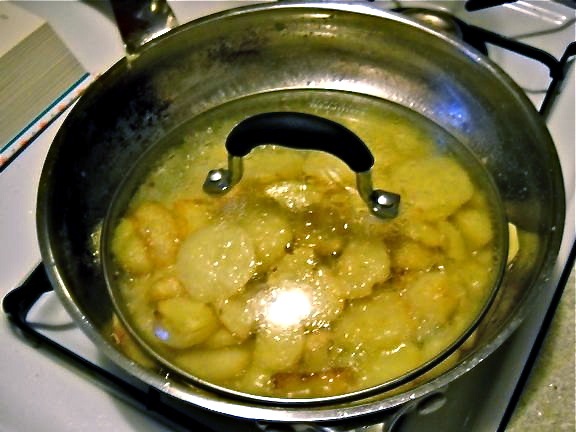 While the potatoes sizzle and the aroma of sweet, buttery bliss fills your kitchen, heat up another large skillet with enough butter and oil to cook your steak in. Wait until the butter foams… 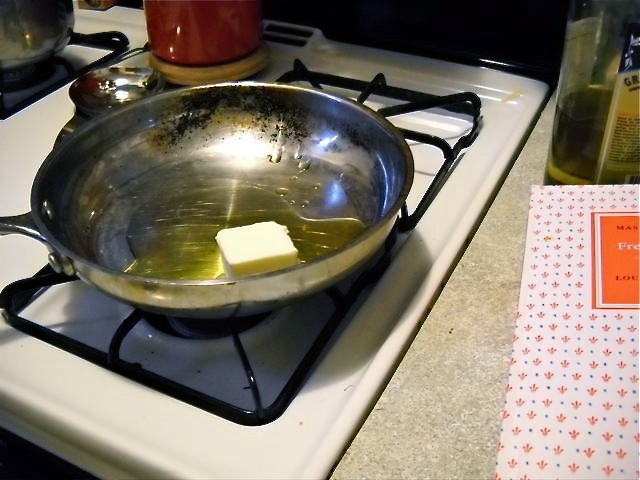 After patting the meat dry, put the gorgeous, pink beefsteak into the pan. Though Bruno marinates his steaks with wine, garlic, and mustard as he cooks, Julia likes to cook the steak in the butter and its natural juices first, and then top it off with the red wine and shallot sauce. I made it both ways, putting aside the mustard butter, and then making the red wine sauce once the steak was browned to perfection. 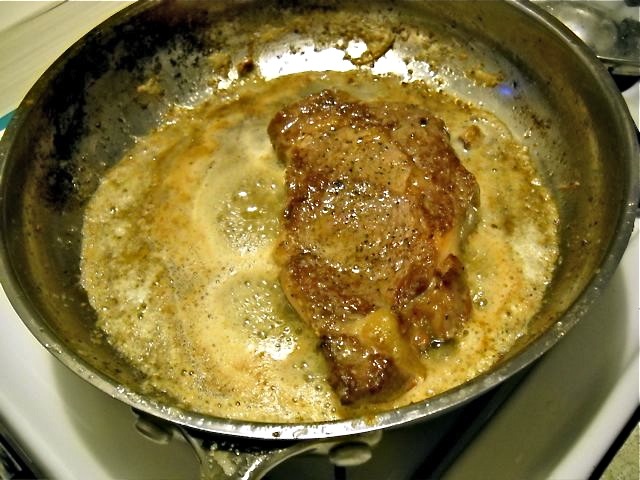 Like any respectable Frenchman, Bruno is incredibly well-versed in grilling—so much so that he sings “The Marseillaise” under his breath, “which he knew from practice took him exactly forty-five seconds.” That’s about how long it takes before he flips his meat to cook the other side. I don’t know a single word of “The Marseillaise,” so if you’re li
ke me you can just hum along to a recording. It really boosted my French spirit!

Cook to your preferred steak doneness: Julia says it should be done to medium rare (à point) when you see a little red juice oozing at the surface, or when it just begins to spring back to the touch. Remove to a platter and season with salt and pepper. Pour the fat out of the pan, then add fresh butter and oil along with the shallots, cooking slowly for one minute. Add the red wine, parsley and tarragon, boiling it down until thick and syrupy. Remove from the heat and add a couple of tablespoons of the mustard butter, letting it melt into the sauce until its color lightens up. Immediately pour the sauce over the steak, sprinkling some extra salt and parsley to taste. By now your potatoes should be soft and golden and ready to be swished around once more, then moved onto a platter. Once off the heat, hit them with some salt, tarragon, and parsley, give them a good toss, and serve alongside the meat, letting their juices blend harmoniously on the plate.

Isabelle scores big points with Bruno (who “liked to soak up the juices from the meat in his potatoes rather than mix them with the oil and vinegar of the salad”) when she leaves the salad in its bowl for them to eat. I decided to put everything on the same plate and dig in, but serve your salad whichever way you please! But please, do it like Bruno did, picnic-style, inside or out: 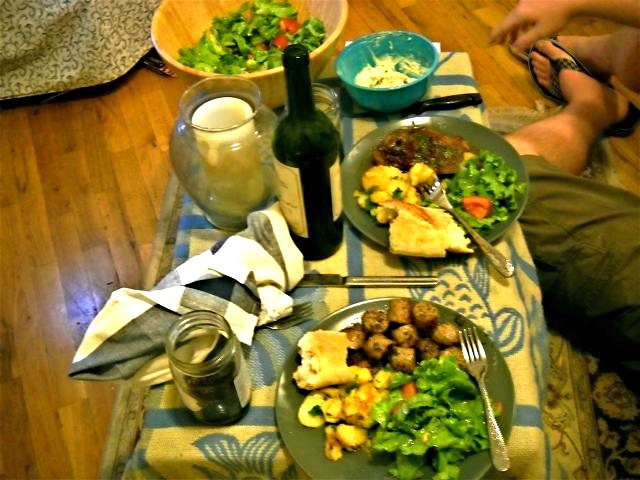 No French meal is complete without a crusty baguette and a nice glass (or in my case, jar) of wine. The finished dish turns a potentially bland meat-and-potatoes meal into a refined French feast. 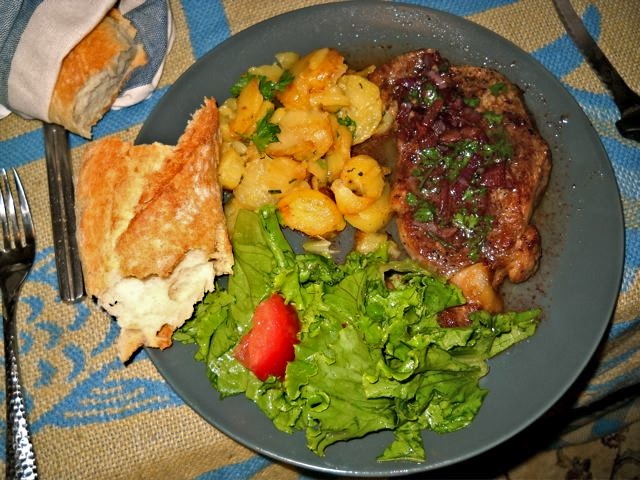