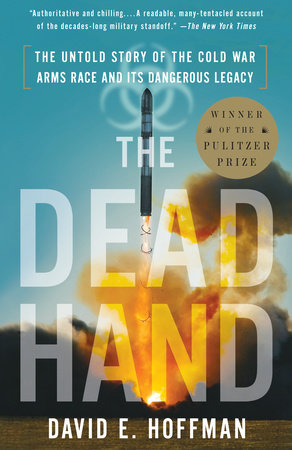 The untold story of the Cold War arms race and its dangerous legacy, The Dead Hand by David Hoffman is now in paperback.

The first full account of how the Cold War arms race finally came to a close, this riveting narrative history sheds new light on the people who struggled to end this era of massive overkill, and examines the legacy of the nuclear, chemical, and biological weapons that remain a threat today.

Drawing on memoirs, interviews in both Russia and the US, and classified documents from deep inside the Kremlin, David E. Hoffman examines the inner motives and secret decisions of each side and details the deadly stockpiles that remained unsecured as the Soviet Union collapsed. This is the fascinating story of how Reagan, Gorbachev, and a previously unheralded collection of scientists, soldiers, diplomats, and spies changed the course of history.

“Authoritative and chilling…. A readable, many-tentacled account of the decades-long military standoff between the United States and the Soviet Union…. The Dead Hand is deadly serious, but this story can verge on pitch-black comedy—Dr. Strangelove as updated by the Coen Brothers.”
—The New York Times