Peter Carey's Parrot and Olivier in America Takes on Tocqueville 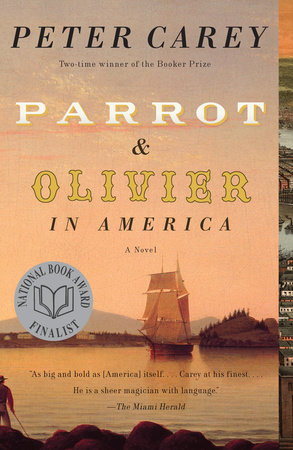 Parrot and Olivier in America, Peter Carey’s latest novel, is an improvisation on the life and work of Alexis de Tocqueville. The titular Olivier stands in for Tocqueville, a Frenchman who visited the United States in the 1830’s in order to study the prison system. Upon his return to France, Tocqueville wrote Democracy in America, one of the most influential accounts of the developing United States.

Though Carey notes in our author Q&A that his approach to the book was both “fastidious in one way and reckless in another,” the parallels between Parrot and Olivier and the life of Alexis de Tocqueville are a great deal of fun to explore. If you’ve never read Democracy for America, it makes a great companion text to Parrot and Olivier — particularly for those interested in spotting the genuine Toqueville quotes woven in among Carey’s inventions. Our Everyman’s Library edition includes a contextual chronology as well as a fabulous introduction by Alan Ryan, who discusses in detail the difficulty of Tocqueville’s journey as well as the perspective that Toqueville had when approaching the United States.

Those interested in further reading can click on over to Peter Carey’s official website, where he has created a bibliography of books referenced during the writing of Parrot and Olivier in America. You can also download a reading group guide, read an excerpt of the book, and buy a copy of the paperback.