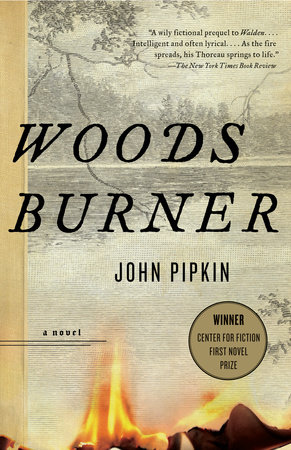 The book blogger Cyberlibrarian turns her attention this week toward John Pipkin‘s debut Woodsburner, which won the Center for Fiction’s First Novel Prize, recommending it to fans of Henry David Thoreau and those who enjoy character driven fiction. Read her full post here.

Set against the backdrop of a devastating forest fire that Henry David Thoreau accidentally set in 1844, John Pipkin’s novel brilliantly illuminates the mind of the young philosopher at a formative moment in his life and in the life of the young nation. The Thoreau of Woodsburner is a lost soul, resigned to a career designing pencils for his father’s factory while dreaming of better things. On the day of the fire, his path crosses those of three very different people, each of whom also harbors a secret dream. Oddmund Hus, a shy Norwegian farmhand, pines for the wife of his brutal employer. Eliot Calvert, a prosperous bookseller, is also a hilariously inept aspiring playwright. Caleb Dowdy preaches fire and brimstone to his followers through an opium haze. Each of their lives, like Thoreau’s, will be changed forever by the fire.

“A wily fictional prequel to Walden. . . . Intelligent and often lyrical. . . . As the fire spreads, his Thoreau springs to life.”
—The New York Times Book Review

“A terrifically exciting story. . . . Just as captivating are those characters Pipkin has invented, men and women consumed by their own passions. They provide a fascinating impression of the nation when it was still young and swelling and struggling to define itself.”
—The Washington Post

“A brilliant first novel. . . . It crackles with heat and energy, as we see these characters tested by the flames, scorched by their passions, beliefs, and hopes.”
—New Orleans Times-Picayune